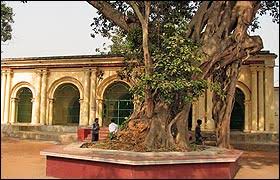 Built in 997 CE by Jagat Malla, the Ma Mrinmoyee Mandir is the most ancient Hindu temple in Bishnupur and one of the oldest surviving Hindu temples in the world.

The Durga puja in this mandir takes continues for almost 20 days and all the other temples of Bishnupur do not start the puja until the cannon has been fired from this temple.

Once king Jagat Malla(994-1007CE) during his hunting expedition in the dense forest surrounding erstwhile Bonbishnupur (now Bishnupur) was enamoured by the sight of a beautiful deer. He chased the wild game desperately but the illusive deer vanished in the bushes and the king also lost his way in the dense forest. Going ahead, there were many surprises in store for him.

The hunting hawk that accompanied Jagat Malla in this expedition spotted a heron began chasing it. But to the king’s surprise, in a while the hunter became the hunted and now the hawk was found being chased by the heron. King Jagat was completely dumbfoumded by such an uncanny event, when he heard a divine female voice:

“This is the holy place where I AM! Shift your capital here. You will find a small murthy of mime under the soil. You must also set up a temple here for my worship.”

Maa Mrinmoyee Devi became the tutelary goddess of the Malla Dynasty until they were converted from Shaktaism to Vaishnavism during the reign of Veer Hambir in late 16th century CE. The Chamunda-appearance (Goddess Durga in the form of destroyer of two demons, Chanda and Munda) of Maa Mrinmoyee Devi had been worshipped. At present, animal sacrifice in the temple precinct is strictly prohibited.

The Durga Puja festival starts on the auspicious day of ‘Jitashtami’ with the worship of Jimutbahana.

On the day of Maha Ashtami, the idol of Vishalakshi with eighteen hands, made of eight metals is worshipped. The time of Sandhi Puja indicating the transient point between Maha Ashtami and Maha Navami according to the almanac is determined by ‘Jalghardi’ (water watch). The message of the water watch is delivered to the main cannoneer, who waits on the top of a hillock called Muchchar Pahar to fire the biggest cannon announcing the auspicious moment of Maha Ashtami. The whole area adjacent to the Maa Mrinnmoyee Devi temple and its surrounding poses a tremendous look as thousands of people from in and around Bishnupur assemble to witness the firing of the holy cannons releasing huge flames of red and yellow colours. According to legend during that auspicious hour of ‘Sandhi Puja’ an all-pervading voice of “Ma” is heard in the air. There’s a popular saying: Malle ra/ Shikhare pa Sakshat dekhbi Jodi Nada Shantipur ja.

That means “the voice of Devi Durga is heard; in Shikhar in Purulia district the footprints of Devi are explicit on vermillion and in Shantipur in Nadia district Devi manifests supernaturally.”

In erstwhile Mallabhum now Bishnupur and its surrounding areas, the booming sounds of the cannons are still followed to commence ‘Sandhi Puja’.

On the auspicious day of Navami, Kachchar Vahini (the goddess riding on mule) is worshipped. This incarnation of Devi Durga is considered dreadful. A deep silence reigns supreme in the temple precinct as the entry of the commoners in the temple is then strictly prohibited. On the day of Dashami, a holy ‘Hom’ (offering into the holy fire) is arranged. In the evening of Dashami, Nilkantha bird is shown before Maa Mrinmoyee Devi followed by the members of the royal family.

As Bishnupur is a holy place of music, the influence of Bishnupur Gharana is reflected in the great festival of Maa Mrinmoyee Devi. According to the pundits the mantras uttered during the pujas are in tune with different ragas of classical music.

(Selected texts taken from: ‘The Statesman’, “Bishnupur Durga Puja: From legend to Reality” by Buddhadev Nandi)