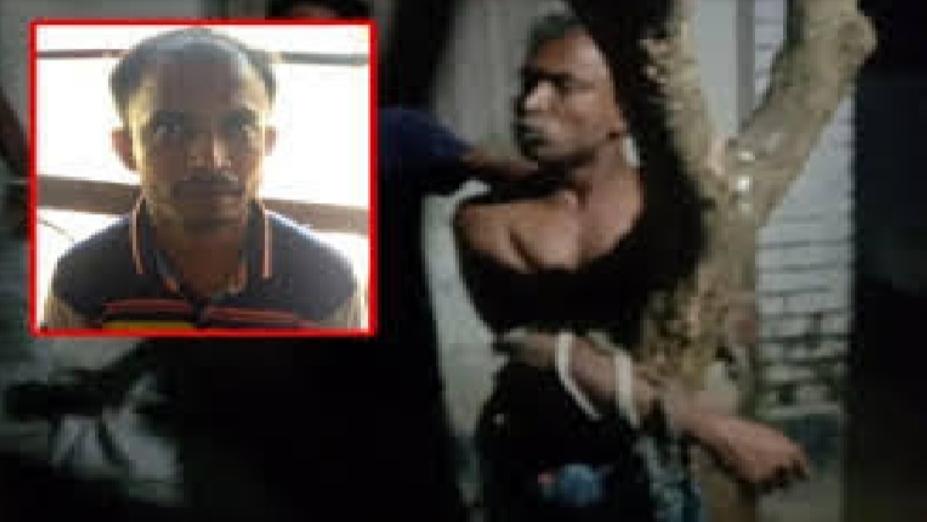 Swecchasebak League leader Mizanur Rahman was caught by the locals while forcibly trying to rape a Hindu woman of the minority community in Kaliganj of the Jhenaidah district of Bangladesh. At that time, local Hindus caught him naked and tied him to a tree. After receiving the information, the police went to the spot, rescued him, and took him to the police station.

The incident took place at Daspara in Alaipur village of the Upazila around 11:30 p.m. on Sunday (November 27). In this incident, the victim, a Hindu woman, filed a case at the Kaliganj police station that night. The police arrested Mizanur Rahman in that case.

The accused, Mizanur Rahman, is the son of Moksed Ali of Alaipur village in the Upazila and the former president of No. 1 Sundarpur-Durgapur Union Swecchasebak League.

Local Hindus said that even before this, Mizanur Rahman came to Daspara in Alukdiapara in Alaipur village and tortured the minority Hindu families. Mizanur Rahman went to the house of Amresh Das of the village around 11:30 p.m. on Sunday. At that time, Amresh was sleeping with his wife and children.

The victim, a Hindu woman, said that she and her husband were sleeping in one room with their children. Suddenly, Mizanur Rahman entered their room, removed the covering from her body, and tried to rape her. At that time, she called her husband. Then Mizanur told everyone to keep quiet and threatened to kill them if they spoke. At this time, Amresh caught Mizanur Rahman. Amresh Das, the husband of the victim, a Hindu woman, said that he demands justice for this incident. Mizanur has tortured them before. He demands exemplary punishment for Mizanur Rahman.

Previously in Jhenaidah, a Muslim girl was threatened for marrying a Hindu boy. A Muslim girl voluntarily married a Hindu boy in Maheshpur Upazila of Jhenaidah district of Bangladesh. Because of this, the surrounding Islamists gathered at his house to kill him. They even used foul language against Hindus to convince the Muslim girl. Later the police arrested the Hindu boy.