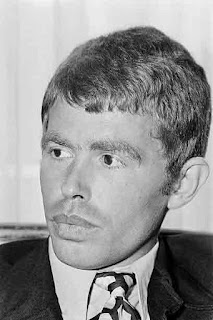 Jean-Eugène-Paul Kay(January 5, 1943 – December 12, 2012) was a French citizen and a surprise ally of the liberation war of Bangladesh who became a part of history on the 3rd of December, 1971 as he tried to hijack a Boeing 720 airplane belonging yo the Pakistan International Airlines (PIA) from France. He did this because he wanted to help the people of East Pakistan.

Kay was reportedly carrying a bomb in his bag and revolver in his hand as he barged into the cockpit of the airplane that was standing  at the Orly airport in Paris, France, full of Pakistani passengers.

Kay demanded 20 tons of medical supplies and relief goods for the refugees of Bangladesh liberation war. Kay who was in favor of an independent Bangladesh, demanded that France send some medical supplies by this plane for the Bengali people who are fighting for independence in East Pakistan, especially for the refugees who had taken shelter in different parts of eastern India especially West Bengal. 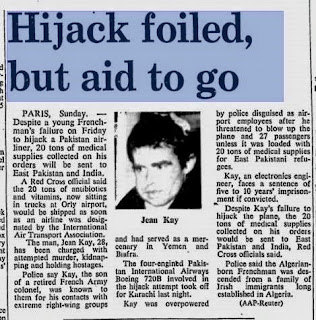 This outstanding event was broadcasted live on television and it shocked the world. It was all over the news the next day.

The French authorities who tried to reason with Kay were convinced that he had no personal gain in this. He truly wanted to help the Bengalis of East Pakistan.

French government did not accept Jean Kay’s demand easily. The French army surrounded the airport with their commandoes. But Kay did not give in and finally at around 5:15 in the evening, the French government accepted Kay’s demand and with the help of French Red Cross and a charitable organisation named Ordre de Malte, a ton of medicines were brought to the airport and loaded in that plane and sent to East Pakistan. During the loading of the medicines, 4 policemen entered in disguise and arrested Kay. It was later discovered that Jean Key was not really carrying a bomb.

Kay was put on trial for the plane hijacking and was sentenced to five years in jail. But he was released in 1973.