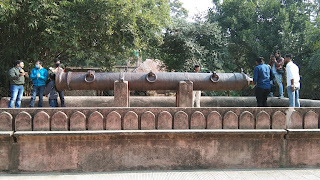 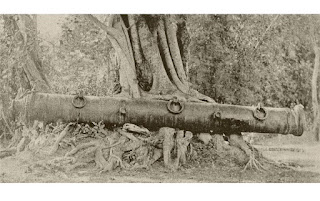 Jahan Kosha Cannon (also known as the Great Gun) or Jahan Kosha Kaman, is placed in Topekhana of Murshidabad, WB. It literally means the Destroyer of the World(Jahan = World, Kosha = Destroy).

The cannon was made in 1637 CE by Janardan Karmakar, a Hindu blacksmith and gunsmith, under the supervision of Hara Ballav Das.

The cannon is made of ashtadhatu or 8 metals, namely lead, iron, silver, copper, tin, zinc, gold and mercury.  Ashtadhatu, also called octo-alloy, is a mix of alloy often used for casting metallic idols in Hindu temples. The composition is laid down in the Shilpa shastras, a collection of ancient texts that describe arts, crafts, and their design rules, principles and standards.

The cannon is more than 7 tons in weight. It is 17 feet and 6 inches in length and 3 feet in width. It has a girth of 5 feet at the touch hole end. The circumference of its mouth is more than one foot. The radius of the touch hole is one and a half inches. In order to fire this cannon once, 17 kilograms of gunpowder was needed. The bore is approximately 6 inches.

The wheels of the gun carriage have disappeared, but the iron-work of the carriage and the trunions are still visible.

The cannon is maintained by the Archaeological Survey of India.