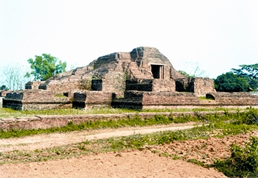 The Lalmai-Mainamati Group of Monuments

Mainamati (ময়নামতি Môynamoti) is an isolated low, dimpled range of hills, dotted with more than 50 ancient Buddhist settlements dating to between the 8th and 12th century CE. It extends through the centre of the district of Comilla in Bangladesh. Mainamati is located almost 8 miles from the town of Comilla. It is the home of one of the most important Buddhist archaeological sites in the region. Comilla Cantonment is located nearby and houses a beautiful colonial era cemetery.[1] Mainamati is named for the Chandra queen of the same name, mother of Govindachandra. Mainamati is only 114 km. from Dhaka city and is just a day’s trip by road on way to Chittagong.

Kutila Mura: situated on a flattened hillock, about 5 km north of Shalban Vihara inside the Comilla Cantonment is a picturesque Buddhist establishment. Here, three stupas are found side by side representing the Buddhist “Trinity” or three jewels, i.e. the Buddha, Dharma and Sangha.

Charpatra Mura: is an isolated small oblong shrine situated about 2.5 km. north-west of Kotila Mura stupas. The only approach to the shrine is from the East through a gateway which leads to a spacious hall. Here a number of shrines can be found. 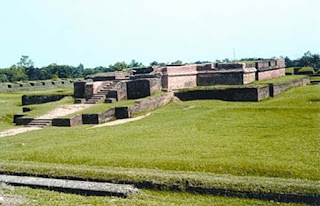 Shalban vihara: The centre piece of the Buddhist sites at Mainamati is the Shalban vihara, almost in the middle of the Mainamati-Lalmai hill range consists of 115 cells, built around a spacious courtyard with a cruciform temple in the centre, facing its only gateway complex to the north, resembling that of the Sompur Bihara. It is clearly a Vihara, or an educational centre with residential facilities.
Excavated Sites Most important among the excavated sites is Shalvan vihara, which lies about the middle of the ridge in the vicinity of the present day Bangladesh Academy for Rural Development (BARD) at Kotbari. Excavations have exposed a large paharpur type Buddhist monastery and a wealth of material objects datable from the 7th to 12th centuries AD. The discoveries from the site include eight inscribed copperplates, about 400 gold and silver coins, many terracotta and baked clay seals and sealings, a large number of sculptural specimens in stone, bronze and terracotta found in situ or otherwise. The grand monastery together with its central shrine was built by Shri Bhavadeva, the fourth ruler of the early deva dynasty of devaparvata, sometime towards the end of the 7th or early 8th century AD. 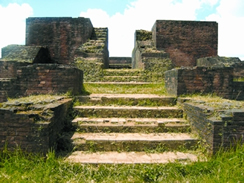 The archaeological remains of itakhola mura lie in three terraces on the hillock opposite to the Rupban Mura site across the Kotbari road. It served for long as a quarry for old bricks and hence the name. Excavations have revealed here a grand stupa complex with an attached monastery to its north. Of the five cultural phases the earlier three lie buried underneath the later remains. Mentionable antiquities from the site, besides the stucco image, are three round pellets of solid gold (19 tolas) and a copperplate, which is still to be deciphered. 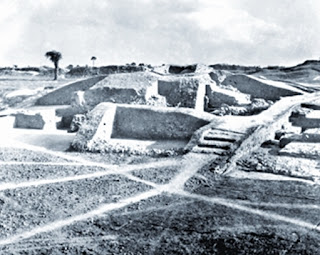 At kutila mura, the highest mound in the northeastern part of the ridge near ananda vihara, were unearthed the most attractive monuments in Mainamati The excavated monuments include three principal stupas and a number of subsidiary chapels and chaitya-halls built around them, all of which were enclosed by a massive boundary wall. Interesting and intricate structural forms and decorative styles have been preserved at the site. Excavations have not yet been completed here; the monastery in the northern end and two grand stupas in two wings of the site remain to be cleared yet. The excavated evidence suggests 7th century AD as the date of the beginning of these monuments. The site continued to be occupied till the 13th century AD as indicated by an Abbasid gold coin recovered from an upper level of the site.
charpatra mura is an interesting small site, situated in the northern part of the ridge in about the centre of the Cantonment area, where was uncovered the remains of a small Hindu temple dated in the Chandra period (10th-11th century AD). It is one of the earliest known examples of Hindu temple architecture in Bangladesh. Four copperplates were discovered in this monument and hence the name Charpatra Mura (four plates).
Largest among the Mainamati monuments is the Ananda Vihara. Situated in the archaeologically rich Kotbari central area, it represents a huge religious-cum-educational establishment of viharas, stupas and chapels all around. Together with the largest water tank in the area, this Vihara complex was built by Shri Anandadeva, the third ruler of the early Deva dynasty, sometime at the end of the 7th or beginning of the 8th century AD. Military contractors and brick hunters damaged this great establishment with its central shrine beyond recognition in 1944-45. Subsequently, the process of Cantonment building seriously affected the site. Excavations carried out here for a few seasons in the late seventies on a limited scale were incomplete in nature.
Itakhola Mura
Next to Shalvan Vihara and Ananda Vihara, the third most important and extensive monastic establishment in Mainamati is the bhoja vihara, situated almost in the centre of the Kotbari area adjacent to BARD. A huge water tank lies on its east. Excavations have revealed the outlines of a square monastery with a large cruciform shrine in the centre of its open courtyard, very similar to Shalvan Vihara and Ananda Vihara.

Mainamati Ranir Bari(palace): The Mainamati site Museum, situated next to Shavian Vihara, houses a good collection of artifacts found at these sites. The Museum has a rich and varied collection of copper plates, gold and silver coins and 86 bronze objects. Over 150 bronze statues have been recovered mostly from the monastic cells, bronze stupas, stone sculptures and hundreds of terracotta plaques each measuring on an average of 9″ high and 8″ to 12″ wide.