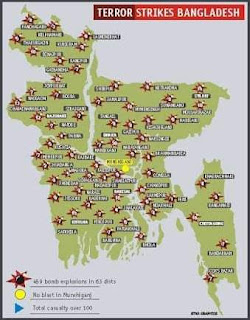 On 17 August 2005, around 500 bomb explosions occurred at 300 locations in 63 out of the 64 districts of Bangladesh. The bombs exploded within a half-hour period starting from 11:30 am. A terrorist organization, Jama’atul Mujahideen Bangladesh (JMB) claimed responsibility for the bombings. The group, led by Shaykh Abdur Rahman and Siddiqur Rahman (also known as Bangla Bhai), is alleged to be affiliated with Al Qaeda, although this has not been proven. Another terrorist group, named Harkat-ul-Jihad al-Islami, was associated with JMB in executing the co-ordinated attack. Following the bombings, both groups were banned by the Government of Bangladesh.

The bomb exploded near Government facilities. In Dhaka they exploded near Bangladesh Secretariat, the Supreme Court Complex, the Prime Minister’s Office, the Dhaka University campus, the Dhaka Sheraton Hotel and Zia International Airport. At Least 115 people injured. 500 small-bombs were exploded in 62 out of 63 districts of Bangladesh. The explosion killed two people (a child in Savar, near Dhaka, and a rickshaw-puller in Chapai Nawabganj District), and injured a further 50.

A rickshaw driver named Rabiul Islam was injured when seven bombs exploded at about 11:10am at Biswa Road crossing near Shah Neamatullah College in the Nawabganj. He died on way to Rajshahi Medical College Hospital.

School boy Abdus Salam, who was 10 was injured when bomb exploded outside his house in Savar. He died in the Hospital.

The main perpetrators of the bombing, Bangla Bhai and Shaykh Abdur Rahman, were captured by the Rapid Action Battalion in early March 2006. They were convicted of murder and terrorism charges, along with four other militants, and were executed by hanging on 30 March 2007. 5 suspects were sentenced to death and one to 20 years in Prison for their part in the bomb attacks in Bogra.

The Indian Government expressed “serious concern and strong condemnation” on the incident.

Motiur Rahman Nizami, the then industry minister, from Jamaat-e-Islami blamed India for the blast.

Moudud Ahmed, the then law minister, from Bangladesh Nationalist Party said “If they try for 100 years, they will not turn Bangladesh into a Taliban state,”.

The then chief cleric Ubaidul Haq remarked to thousands of worshippers at Baitul Mukarram Mosque, “Islam prohibits suicide bombings. These bombers are enemies of Islam. It is a duty for all Muslims to stand up against those who are killing people in the name of Islam.”