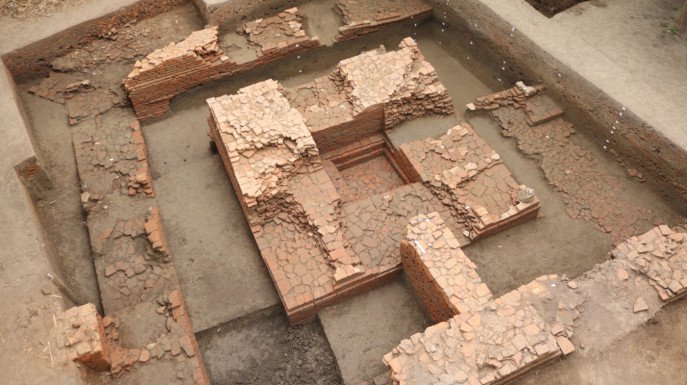 An archaeological excavation at Rezakpur in the Kapilmuni union of Paikgachha Upazila of Khulna has unearthed a thousand-year-old specimen. It has been named ‘Kapilmuni Dhibi’. Terracotta, statues, large earthenware hooks, cowries, rice, bricks, etc are found there. The excavation work started on March 12 and lasted till the last week of April. The excavation team was led by Afroza Khan Mita, Regional Director, Khulna and Barisal Division of the Department of Archeology. She said, “The patterns we have found in Rezakpur village are thought to be between one thousand and 1200 years old.”

Many specimens have been found in Khulna, Jessore and Satkhira areas before. There are many similarities between the pattern of Rezakpur and the earlier pattern. Especially there are many similarities with the pattern of Bharatbhayna in Keshabpur of Jessore district. Mita added that there are similarities between the bricks found there and the bricks found here. This pattern is located about 50 kilometres away from Khulna city by road.

It has been seen that excavations have been carried out in an area of ​​about 250 meters in length and 160 meters in width. And the soil has been dug about 6 feet deep from the plane. The main archaeological site is clear. Besides, several samples have also been collected. A square architectural structure has been discovered in that mound. This square room has an orbit around it, which is surrounded by a wall. These include pots, jugs, bowls, dishes, vessels, pans, lamps, etc.

Fragments of terracotta plaques, fragments of terracotta statues, ornate bricks, and various types of archaeological materials are also found here. Black rice has been found mixed with soil on the outer walls of the northwest corner and the northeast orbit of the square architectural structure. Archaeologists call it burnt rice. Their idea is to study this rice and get an idea about the nature-environment including the ancient rice species here.

This mound area is privately owned property. People have used the bricks here for their purposes. There are roads, houses, barns, ponds, ponds, orchards, bamboo bushes etc. The bricks of the mound have been lifted and holes have been dug there. And they have used the bricks in their homes. Many ancient monuments have been found in this area adjacent to the Sundarbans. Even the special tile-like bricks found in many houses of this Rezakpur village are taken from this place.

From this, the researchers think that there are many ancient monuments in and around Rezakpur. Locally, these were known to the people as mounds and people used these special bricks for their own needs. There are such mounds at several places in Kapilmuni and adjoining Tala Upazila of Satkhira district. From this, it is inferred that many more patterns can be found here. This area adjacent to the Sundarbans has long been considered a human settlement. The Ramayana mentions Kapileshwar Muni and the vast swampy forest which is identical to the Sundarbans forest. Satish Chandra Mitra’s hundred-year-old book ‘History of Jessore-Khulna’ contains various archaeological monuments and places mentioned in Kapilmuni. There are also reports of multiple mounds in the area. Buddha statues were found in this area during the excavation of the pond. The idol of Vishnu in the temple at Kapilmuni Bazar is also believed to be between 1200 and 1400 years old.

The archaeological team involved in the excavations here also says that there are many archaeological sites in the vicinity including Kapilmuni, Rezakpur, Ramnagar, Singhjani, and Kashimnagar. They have dubbed this pattern of Rezakpur as ‘Kapilmuni mound’. It is approximately 250 meters long and 160 meters wide. The mound is located at an altitude of 3.44 meters above sea level.

Advocate Biplob Kanti Mandal, a local resident who is enthusiastic about history and heritage, has also visited the site for a couple of days. He said, ‘Although much later, the Archaeological Department has done a proper job by excavating at Rezakpur; However, this excavation work should be much more extensive. Many specimens have been lost due to not being diligent in an excavation so far. More excavation work should be done to protect what is there.