Protest in US demanding recognition of the 1971 Hindu genocide 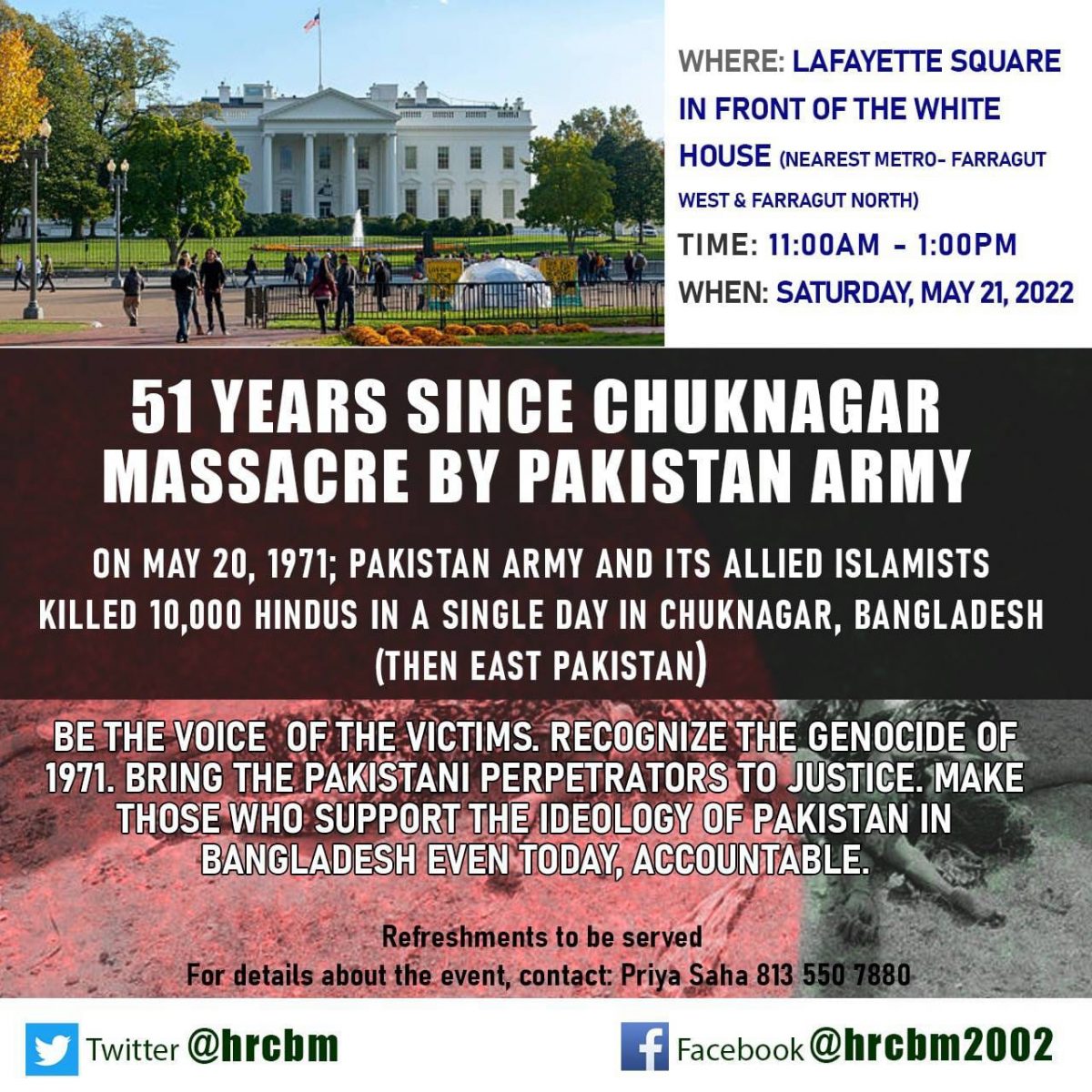 Protest in US demanding recognition of the 1971 Hindu genocide

In 1971, Pakistani forces and their allied Islamists carried out one of the most heinous Hindu genocides in the history of mankind all over Bangladesh. One Hindu massacre after another was carried out in cold blood for almost nine months which is still not recognized worldwide. One such hellish Hindu genocide is the Chuknagar Hindu Genocide. May 20 marks the 52nd anniversary of the Chuknagar Hindu Genocide.

Almost 10000 people had died that day in a small unknown town called Chuknagar, at Dumuria of Khulna district, East Pakistan (today’s Bangladesh). The exact numbers are fuzzy to date due to various reasons but according to one Muslim eye witness Abul Bashar, he had found 44 manual labourers who had disposed of the dead bodies at the behest of the Pakistani army. The army had paid them two annas per body. Each labourer claimed to have disposed of at least 100 bodies. That gives a figure of 4,400 people killed. Abul Bashar nonetheless claims the figure is closer to 10,000 since many bodies were also washed away. Regardless of the number of deaths, a massacre had indeed occurred.

The most vulnerable of the lot were Bengali Hindus since they were being singled out both by Pakistani army and Bengali speaking muslims/Bihari Razakars (private Muslim militias). Journalist Anthony Mascarenhas narrates what he saw himself in East Pakistan since he was deputed by Pakistani army itself to report positively on it. What he saw there turned his worldview upside down and he decided to narrate the real story of Pakistanti atrocities on Bengali Hindus.

In one incident, he narrates that he was with a Pakistani army officer Major who was about to shoot a 24 year old on ‘suspicion’ of being Hindu. When he asked the Major why he wants to shoot the man, the officer replied “Because he might be a Hindu or he might be a rebel, perhaps a student. They know we are sorting them out and they betray themselves by running.”

“But why are you killing them? And why pick on the Hindus?” Mascarenhas persisted.

“Must I remind you,” the Major said severely, “how they have tried to destroy Pakistan? Now under the cover of the fighting we have an excellent opportunity of finishing them off.” “Of course,” he added hastily, “we are only killing the Hindu men. We are soldiers, not cowards.”

A meeting has been organized in the United States on May 21 at the initiative of the Human Rights Congress for Bangladeshi Minorities to expose the Chuknagar genocide organized by the Pakistani forces and their allied Islamists. The meeting, to be held at Lafayette Square in front of the White House, will focus on the Chuknagar Hindu genocide and demand global recognition of the 1971 Hindu genocide. The meeting is scheduled for 11 a.m. American time.