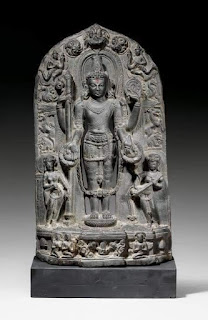 Black Stone Stele Depicting the Four-Armed Vishnu, well carved in openwork standing on a double-lotus throne, his four hands holding the staff, chakra and conch shell, wearing a short dhoti secured with a festooned belt, a sash and sacred thread around the torso, multiple necklaces and other jewelry, the face with full lips, aquiline nose and downcast eyes beneath incised brows, the hair drawn into a high chignon and secured with a foliate crown, flanked by Lakshmi and Saraswati holding the flywhisk and vina respectively, over-arched by his avatars encircled by scrollwork on the throneback,  the arched mandorla centered by a kirttimukha mask and two apsaras

From a German private collection, acquired in the early 1990’s in Switzerland