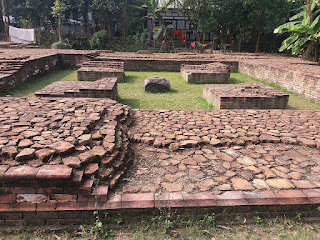 This is one of the thirty viharas built by Emperor Dharmapala during his regime c. 820 as the second emperor of the Pala Empire. It is connected to Atiśa, an important figure in Tibetan Buddhism. During the time of Atiśa, this region was the center of Buddhist education and some 8,000 students and professors came to study at Bikrampur from as far as China, Tibet, Nepal and Thailand.

On 23 March 2013, Director of the Archaeological Excavation and Research in Bikrampur region, declared the discovery of this 1000-year-old Buddhist Vihara. Over 100 precious idols and sculptures have been found till March, 2013.