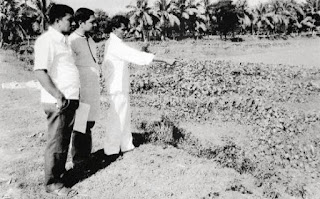 A witness of the genocide, Sridham Das showing the burial sites near Beltoli killing field.

Beltoli is another of the largest killing sites where at least 2000 people were killed by the Pakistan army during the Liberation War. One of the witnesses of the massacre, Sridham Das, said that he had seen 30-35 dead bodies buried everyday in this killing site which is now almost covered by a swampy area filled with hyacinths.

Few days after the crackdown on March 25, Pakistani soldiers established their garrison at a cigarette factory near the strategically important Laksham railway station. This garrison was particularly notorious for torturing and killing thousands of Bangalee women kidnapped from the nearby villages and towns. Aided by the Bihari collaborators, Pakistani troops led by their sadistic officers, Major Muzaffar Hassan Gaddarji and Captain Obaidur Rahman, used to raid villages and towns every other day to hunt down freedom fighters and kidnap women. Workers of the factory and the railway station were forced to bury their victims at the killing site. One of the workers, Sridham Das, is still alive and had buried thousands of men and women killed by the Pakistani soldiers. Sometimes Pakistani soldiers even forced him to bury tortured people alive.

According to his account, usually before mass shooting the arrested people, Pakistani troops used to force the villagers to gather at the killing site. Then in front of the crowd, they used to shoot their captives and warned the crowd that this would be the consequence of collaborating with the freedom fighters.

After the war, the cigarette factory was sealed by the allied forces. A local journalist visited the factory in 1972 and published his account in the February 10, 1972 issue of the weekly Amod. He said, “After entering the factory the smell of rotting flesh and blood struck my nose. This was coming from half-buried dead bodies all around the premises of the factory. I saw torture equipment and gallows where Pakistani soldiers used to hang Bangalis.” (Source: Beltoli Genocide by Mamun Siddiqui; 1971; Genocide-Torture Archive & Museum Trust)

However, like all other Pakistani war criminals, the commanders of this garrison also enjoyed safe exit to Pakistan after the war and faced no trial for their war crimes. Even due to its remote location Beltoli killing field was also overlooked by the war historians and the government. A large part of the killing site is under the marsh covered by water hyacinths where skeletons of many victims can still be found. A memorial is now under construction beside the killing field. Construction workers said that they have found bones and remnants of human bodies while digging the basement of the memorial.

There are few nations in the world who have achieved liberty at the cost of such a brutal war like the Liberation War of Bangladesh. Thousands of killing sites all over the country stand witness to genocide that is considered one of the most violent incidents of human massacre (if not the most) after the Holocaust of World War II.

However, the most unfortunate fact is that all the key perpetrators of the genocide, the listed 200 Pakistani war criminals who became the prisoners of war after the liberation of Bangladesh, were safely transported to Pakistan by the allied Indian army where those war criminals were rehabilitated with full state facilities. On the other hand, Bangladesh became politically divided where history and legacy of the Liberation War has been distorted. If we simply erect a monument at these sites while being forgetful to the cause, then we shall be doing great injustice to the nation by burying the truth of what truly happened and why.