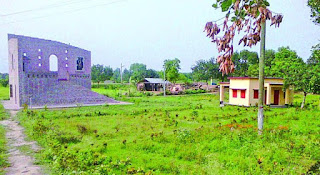 The Pakistan army massacred millions of  Bengali civilians during the course of the Liberation War. Besides the killing sites of Dhaka such as Rayer Bazar, Mohammadpur and Mirpur, there are thousands of killing fields all around Bangladesh which still bear the testimony of the brutal genocide carried out during the Liberation War.

In three of the largest killing sites of the country, thousands of our countrymen have been tortured and killed. However, tragic realities common to these sites are that they are some of the least mentioned and under preserved sites, and none of the perpetrators who committed crimes there faced any trial.

Another large killing site which is hardly mentioned in the historical accounts of the Liberation War is located at Alamdanga town of Chuadanga district. The site is a low-lying area adjacent to a massive railway bridge connecting northern Rajshahi district with the southern part of the country. During the war, there was a strong Pakistani garrison guarding the bridge and the adjacent area. Pakistani troops established their position in the area in June, 1971. From then until December 7, 1971, they killed thousands of Bangalees and buried them in the low-lying field adjacent to their camp. They systematically destroyed all the nearby villages and killed villagers in the name of counter-insurgency operation.

Pakistani soldiers used to stop passenger trains and buses routinely checking for freedom fighters and fleeing refugees. They took the suspects to their camp, tortured them and threw their dead bodies into the ditch. Sometimes they buried their half dead victims alive with other corpses. There was a special torture cell for the female prisoners where Pakistani soldiers had raped thousands of Bangalee women.

After the liberation of the area on December 7, 1971, freedom fighters found hundreds of decaying dead bodies lying in the ditch. While burying the dead bodies, they discovered numerous skeletons of men, women and children in the ditch. It is assumed that around three thousand people were killed alone in this site during the seven months of Pakistani occupation.

This killing site is well-known for its horrible past among the local residents. The freedom fighters who discovered the area still recall the day with shock and horror. A memorial is being built on the killing site. The one-storey building which was used as a torture cell by the Pakistani soldiers is now being used as a government office. All three commanding officers of this garrison, Lt. Colonel Abdul Ghaffor, Major Rana Mohyydin Khan and Captain Muzaffar Hossain Naqvi, have been listed among 195 Pakistani war criminals. However, none of them faced trial for their heinous crimes.