5 Hindus stabbed and beaten in Baufal, threatened to leave the country 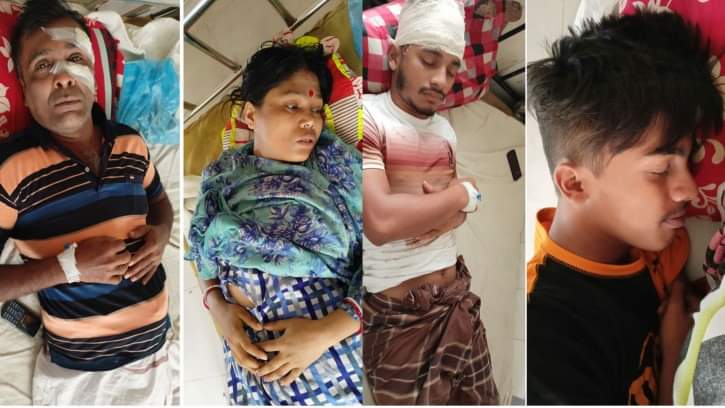 5 Hindus stabbed and beaten in Baufal, threatened to leave the country

A Muslim goat owner and his gang have severely injured five members of the Hindu community by chopping and beating them for preventing cattle from eating crops in Uttar Kachipara village of Kachipara union in Baufal of Bangladesh. The injured have been admitted to Baufal Upazila Health Complex. The condition of two of the injured is critical. The incident took place around 5 pm on Sunday (May 8).

Preparations are underway to file a case in this regard at the Baufal police station. According to the sources, Nazem Ali Rari of Uttar Kachipara village raises 60 goats and 10 cows. They used to destroy the crops of the surrounding lands as there was no rearing system for keeping the cattle tied up. Sushil Das had recently cultivated Mugdal on 5 acres of land adjacent to Nazem Ali Rari‘s house. For a long time, those cattle had been destroying the mugdal.

In this regard, Sushil Das had more than once requested to keep the cattle tied up. On the day of the incident, herds of goats and cows entered the Mugdal field, ate many pulses and destroyed them. When Sushil Das’s nephew Kartik Das talked about removing cattle from the farm, Nazem Ali Rari said them to leave the land and go to India. Otherwise, they were threatened with death.

When the two started arguing, Nazem Ali’s three sons Jaber Rari (26), Nizam Rari (26) and Nesar Rari (24) came with Axe, Rod and stick and attacked Kartik with abusive language. When Sushil Das (60), Uttam Das (40), Shuvo Das (22) and Beauty Rani (35) came forward to save him, the opponents stabbed Shuvo Das in the head and Uttam Das in the face. They then beat up old Sushil Das and beat up a housewife named Beauty Rani, took off her clothes and took away her gold ornaments.

Baufal police officer in charge (OC) Al-Mamun said, “I know about the matter. Legal action will be taken as soon as the complaint is received.” Meanwhile, members of the Hindu victim’s family are said to be living in a state of panic as they were threatened with death and deportation due to their Hindu identity.