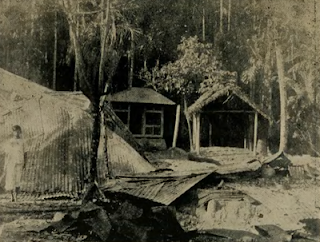 A destroyed homestead in Chandpur.

On 12 October, the residence of Chittaranjan Dutta Raychaudhuri, at Shayestaganj, under the Raipur police station, was attacked by a Muslim mob. Kasem’s private army attacked the Das family of Gopairbag, near Sompara market, under the Ramganj police station. The Das family were Kasem’s immediate neighbour. The Chaudhuri family of Noakhola village under the Ramganj police station were also attacked by a Muslim mob. The attackers resorted to murder, loot and arson. Another Muslim mob attacked the residence of Yashoda Pal and Bharat Bhuiyan at Gobindapur under Ramganj police station. Between Amishapara and Satgharia the residences of the Bhaumiks and the Pals were totally destroyed by fire. In Nandigram, Golam Sarwar’s private army burnt the Nag residence, the post office and the school founded by Ramanikanta Nag. The Hindus from the nearby areas had taken shelter in the Nag residence and initially the police protected them, repulsing the first attacks. The attackers then resorted to indiscriminate looting in the village. On 13 October, at 12 noon, a mob of 200 to 250 Muslims armed with deadly weapons attacked the Hindus in Changirgaon. 1,500 maunds of paddy were burnt and all the temples were destroyed. The Hindu women were stripped of their shakha and sindur. The men were forced to perform the namaz. On extreme instances Hindu men were circumcised by the sword, leading to heavy bleeding and eventual death.