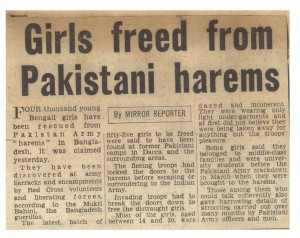 Newspaper clipping depicting Pakistani brutality on women. Though majority of these women were Hindu, there were a huge number of Muslim girls as well. Just goes to show that brutality on women is not bound by religion…

“In your opinion, why do you think the women remained silent?”

“Horror, you see. They all had nightmares. You never get over it! A lot of them had tremendous anxiety. Because we were foreign and they didn’t trust anybody who was foreign. They didn’t know what we were going to do to them…”