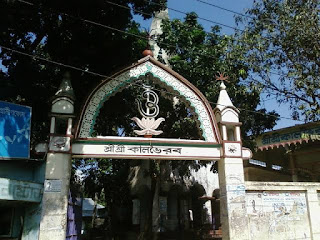 Kal Bhairab Temple (কালভৈরব মন্দির) is located in Medda in the Brahmanbaria district of Bangladesh and dedicated to God Shiva (Kal Bhairab roop). The temple is famed for the giant 28-feet (24 feet) tall Shiva statue assumed to be the largest in the world. Though the Hindu Lord Shiva, who is called the Kal Bhairab is the main attraction, Goddess Kali is also worshipped there. The statue of Kali is situated on the right side of the Kal Bhairab and the statue of the Goddess Saraswati is placed on the left. The temple is a major pilgrimage place for Shaivites in Bangladesh.

The temple dates back to the 19th century. It is said that approximately 200 years ago a sculptor named Durgacharan Acharjee built the statue. Noor Muhammad, the famous landlord of Sarail donated the land to build this temple.

Before the Brahmanbaria city was established, Medda was a market located beside the Titas river. This market is almost 300 years old. Durgacharan first built this statue by the bank of the river with soil. Regular prayers were held by the devotees until 1971.

During the Bangladesh Liberation War the Pakistani soldiers damaged and looted a lot of Hindu temples in Bangladesh. This temple was one of the damaged temples. The soldiers damaged the parts of this statue using dynamite. Later the statue was built again taking four years. The current statue stands at 24 feet and is made of stone.