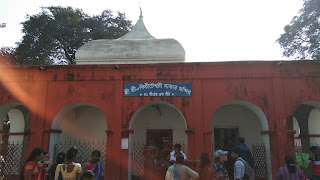 The kireetkona village is just five kilometers from Dahapara rail station, where the Kiriteswari Mandir is situated. It is the oldest temple in the Murshidabad district. It is one of the 51 Shakti Peethas (Sati Peetha) and it is where Sati’s ‘kirit’ or crown fell at Kireetkona village, 3 km from Lalbag Court Road station under district Murshidabad, She is also named as “Mukuteshwari” ( as her mukut or crown fell).
The original Mandir was destroyed in 1405. The present temple was made in the 19th century by Darpanarayan. The town is sanctified by the river Bhagirathi and Maa Kiriteswari, the Holy Goddess. It is a famous Hindu temple in West Bengal.
The main temple of the town is that of Maa Kiriteshwari’s temple. The unique feature of the temple is the absence of any image or deity. The red coloured stone which is supposed to be the symbolic representation of the Goddess is covered by a red veil the year through. The veil is changed and she is given a holy bath only on Ashtami of each Durga Puja. The head dress of the Hindu Goddess, Kiriteswari, has been worshipped through the ages.
The head dress is preserved at Rani Bhabani’s Guptamath at present, situated opposite to the temple. In the new temple, there is no image. There is a high alter on which a small alter is seen. The face of Maa is indexed here. Yogendranarayan Roy, by Darpanarayan the late king of Lalgola had renovated and had taken care of the temple constructed. To ruins, the original temple had turned. On the right side, beneath given the shot of the ruined one.
Bhagwan Roy received the land where the temple was situated from Akbar, the great. The old temple, built by Bhagwan Roy was southern entranced and the new one, built by Darpanarayan Roy , a successor of Bhagwan Roy, was eastern entranced. The temple remains opened from 6 am to 3 pm and again from 5 pm to 10pm daily. All information was stated by the temple’s head priest- Sri Dilip Bhattacharya, who is the 3rd generation running in the priest family to serve the Holy mother. Festivals are held at Durga Puja, Kali Puja and on Amavasya (new moon). The special ritual is held on the Ratanti Amavasya (Magh- no moon night) with whole night yagna and other special rituals. And daily, Maa is offered with ‘anna-bhog’ (rice) on the noon. Besides this, various types of seasonal fruit is offered to the goddess. On every Tuesday of the month of Poush (mid-Dec to Mid Jan), a beautiful rural fair is held since the time of Darpanarayan.
Here the ‘Shakti’ (goddess) is ‘Vimala’ and ‘Bhairav’ (Lord Shiva) is ‘Sanwart’.
Image: Sriti O Chetona
Text: WB Tourism Website (wbtourism.gov)