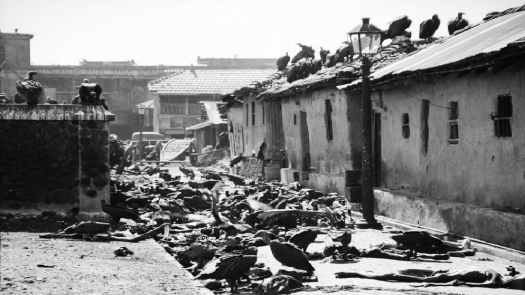 On the third day (12th October) of the holocaust, Sri Chittaranjan Datta Chaudhury, grandson of Rai Bahadur Pyarilal Roychaudhury, zaminder of Sayestanagar, P.S.Raypur, sacrificed his life but not his honor. He with his family and servants lived in a palatial three storied building. He knew that he would be next target of the blood-thirsty rioters like the manager of the Sayestanagar Zamindari, Sri Rajendralal Ghosh.

Apprehending immediate danger he sent his wife and children to one of this trusted ryot’s (Indian farmer) house and they were saved. But his old mother said that she would not leave her son alone in that dangerous moment. When the marauding Muslims attacked his house, he took his position in one room of his building. Chittaranjan desperately shot at the attackers therefrom. He continued firing for hours together.

When bullets were almost exhausted, and only two bullets left, Chittaranjan asked his mother whether she would like to die in her son’s hand or at the hands of the Muslims. Getting his mother’s consent, he killed her with one bullet and killed himself with the other bullet, but did not surrender his self respect.

His heroic sacrifice reminded the self-immolation of the Rajputs. Later the goondas beheaded him and played football with the decapitated head.