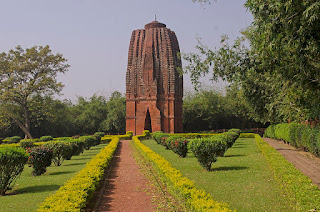 Sat Deul or Saat Deule (সাত দেউল) is assumably a 10th-century temple at Deule in the Memari I CD block in the Bardhaman Sadar South subdivision of the Purba Bardhaman district of West Bengal. 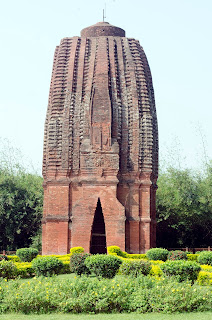 Sat Deul is located east of the Durgapur Expressway (part of National Highway 19) and is approachable via the Memari-Tarakeswar Road. It is 3.5 km from Chanchai railway station on the Howrah-Bardhaman chord line. “The complex is complete with manicured lawns, flower beds and paved pathways.”

David J. McCutchion says that the pre-dominant traditional architectural style for temples in the western areas of Bengal in the pre-Muslim period is the tall curvilinear rekha deul and it went on developing from the late 7th century or early 8th century to around the 12th century, increasing its complexity and height but retaining its basic features. Such temples had “curvilinear shikhara with chaitya mesh decoration, surmounted by a large amalaka and kalasa finial. Examples of such dilapidated deuls are still standing at Satdeula (in Bardhaman), Bahulara and Sonatapal (in Bankura) and Deulghat (in Purulia). On the brick deuls already mentioned here, plus Jatar (in 24 Parganas) and Para (in Purulia), “we find extensive and remarkably fine stucco work on carved brick”. 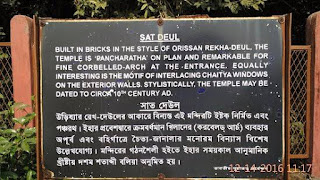 “This is a beautifully constructed 10th century temple which resembles the Odisha art pattern of rekh. This temple is situated in Memari-I C.D. Block.”

“The exterior walls of Sat Deul contains elaborate brick work decoration of floral and geometric patterns, sadly most of it has been lost.”

Not much can be ascertained about the history of the temple. However, some of the Jain designs on the walls indicate that it was possibly a Jain temple.

“P.C.Dasgupta”, writing in the Jain Journal 7/3: 130- 132, 1973, mentions Sat Deuliya as a rare Jain icon. In the List of Monuments of National Importance in West Bengal it is mentioned as a Jain brick temple.