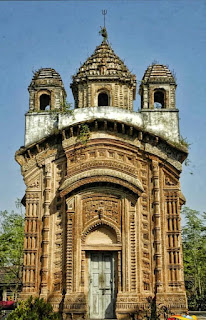 The Ratneswar Temple.
One of the most magnificent showcases of Hindu terracotta art is this 300+ years ancient Ratneswar Shiva Temple.
Located in Bhattabati Dham of Murshidabad, this temple is a national treasure.
(Bhattabati is under Nabagram P.S, about 5 kms from the Lalbagh Sadar Ghat.) 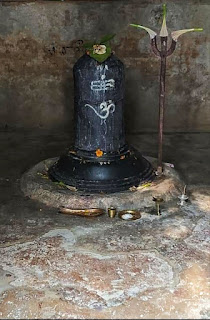 The Shiva Linga inside the Ratneswar Temple.

According to legend, during the reign of Alauddin Husain Shah (1494-1519 AD), the independent Sultan of Bengal, around 1200 Bhatta Brahmin families from Karnat of Southern India came to settle down at this place. Hence the place got its name as Bhattabati (Residences of the Bhattas) or Bhattamati (Land of the Bhattas). The Ratneswar Temple is said to have been built during the early 18th century when the second Qanungo of Bengal Joy Narayan (জয় নারায়ন), used to live here at Bhattabati, while the first Qanungo Darpa Narayan (দর্প নারায়ন) stayed at Dahapara. It is not known who built this temple and precisely when. This Pancha-Ratna Shiva Temple with exquisite Terracotta Arts, is possibly the most beautiful temple in this district and can easily stand favourable comparison with any terracotta temple in West Bengal.

The temple faces south and measures 8.75 square meters at the base. The temple plinth itself is 4.87 x 4.90 m. While the height is approximately 10 meters. The first arch over the doorway is 2.85 meters. From the plinth; the second arch over – hanging this is at a height of 4.37 meters. While the third arch is at a height of 5.80 meters. The rectangular space between the first arch and the second is heavily ornamented all round the borders and filled in with a variety of scenes.