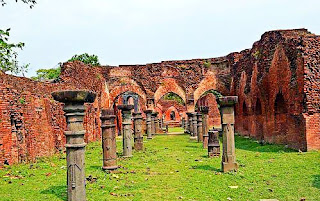 Located in Pandua of Malda, the Bais Darwaza Masjid (literally the ’22 Door Mosque’) was built in 1340. In reality it as 24 doors ( 21 front and 3 on the side) and is over 70 metres long. The masjid is built from brick and boasts terracotta architecture on its walls. But the stone pillars located in the interiors of the masjid undoubtedly belonged to some Hindu Temple.

These pillars are located near the Minar, which has been kept under lock and key on orders of the Archaeological Survey of India.

Many parts of this masjid is in ruins but it is evident from the arches standing on columns have been removed from Hindu temples.

Pradyumne Shrinkhala Maha Shakti Peetha (1 of the 18 Maha Shakti Peethas of the Indian subcontinent) was located in Pandua, and was a part of the Mahanad Kingdom. In 1295, Jalaluddin Khilji sent two Sufi warriors named Shah Safiuddin and Sharafuddin Bu Ali Qalandar with an army to seize and destroy Pandua. They were accompanied by another army led by Zafar Khan Bahram Aitgin who came at the behest of the Sultan of Gaur. Around 60 Hindu princes stood against this onslaught and were defeated. The Sufis then converted an observatory in to a victory tower which is now known as the Pandua Minar. Within a few decades the temple was converted to a masjid – the Bais Darwaza Masjid.