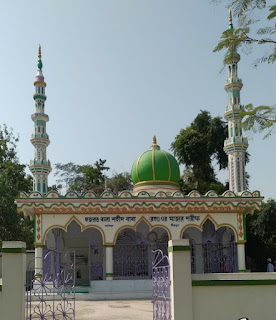 Sayed Bala Baba Mazar of Bargaon, Khustigiri is one of the top Dargahs in Birbhum. Originally a Hindu temple, this mazar now holds the remains of Muslim saint Saiyad (Sayed) Shah Abdullah Kirmani.

Upon first look, one can easily relate it to thousands of small mandirs with devalayas on the inside and a ‘dalan’ for the devotees to sit in.

It is said that Sayed Shah Abdullah Kirmani left Kirman in Iran (his native country) and visited a Muslim saint named Shah Arzani, who died at Patna during the reign of Shah Jahan in 1630 CE. Shah Arzani directed him to go to Bengal and gave him a toothpick of chambeli wood. He told him to stay at the place where the toothpick became fresh and green. He arrived in Birbhum and stayed at Bargaon, where he performed several miracles but the toothpick remained unchanged. He then moved on to Khustigiri. There one morning he found the toothpick to have become fresh and green. He planted it and it soon became a large tree. Shah Abdullah is specially renowned for his power over serpents. His dargah is in the hands of his descendants and is visited by numerous people.