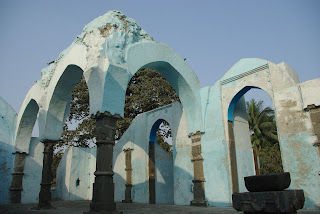 In the late 14th century a Pathan commander named Ulugh Majlis Khan(Khurshid Khan) was the Wazir of the region comprising of present day Bardhaman, Kalna, Selimabad and Mangalkot, under the Gaur Sultanate. Khan’s tyrannical administration was based in Kalna, where he decreed the construction of three mosques. The mosque at Datankathitala was built in 1490 on a Hindu temple having an octagonal foundation, typically Hindu hexagonal columns and Hindu motifs of Sun, lotus, bell, deers etc. In his later life, Khan became a Wali and established his Khanqah beside the mosque, which came to be known as Majlis Saheber Masjid.