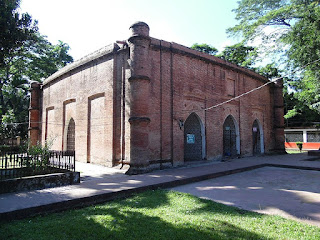 Located in Qasba village, Gournadi Upazila of Barisal district in Bangladesh, the Qasba Masjid or Kasba Masjid is among the most ancient and prominent masjids of BD. This medieval mosque is also known as “Allahr Masjid”. According to locals, it was apparently “built” some time in the 15th century by some Sabhi Khan.

But there is no inscription anywhere on the mosque or the complex to determine the date of construction. The masjid looks exactly like a typical Hindu navaratna mandir with some Islamic influence here and there. It is built of red bricks.

This masjid boasts of magnificent terracotta decoration that has stood the test of time…but the motifs in the terracotta ornamentation is not acceptable in Islam. The leftist and modern Islamist rhetoric arranges for a “Delhi Sultanat influence” narrative, but this narrative is weak to cover up the fact the this is just another example of a mandir being forcibly converted to a masjid or another example of a mosque being built using construction materials from of a demolished mandir.