Not unlike the imambaras of Lucknow, the largest imambara of West Bengal was also a Hindu monument. The entire campus of “Kila Nizamat”, which includes the Bada Kothi or Hazarduari Palace, the Bacchewali Tope, the clock tower, the Nizamat Imambara, the Madina Masjid and Chawk Masjid, the Shia Complex, Wasif Manzil, the two Zurud Mosques – one on the east of the palace and the other one between the Wasif Manzil and the south gate of the palace – and the Nawab Bahadur’s Institution (or, Nizamat College) surrounding it; was presumably an ancient Hindu township or a walled city ruled by a Hindu king. The history that we read as ” fact” today was concocted by the Islamic rulers (as is the norm). But since history is “unquestionable”, no one gets to ask  as to how the historians got to the conclusions. History is passed on from generation to generation, just like folk tales. Once a lie or the ruler’s version of the truth is set forth as “fact” or history, it then continues to be considered as ved vakya or the ultimate truth, which cannot be challenged. This dogmatic approach of history is the main challenge that Indians face when endeavoring to find their heritage. Especially in Bengal, this endeavour lands you in nothing but deep waters. 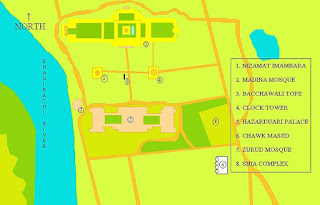 The known history of the Kila Nizamat goes something like this –

i) “The Bara Kothi or Hazarduari Palace was built in the nineteenth century by architect Duncan Macleod, under the reign of Nawab Nazim Humayun Jah of Bengal, Bihar and Orissa (1824–1838). The foundation stone of the palace was laid on 9 August 1829, and that very day the construction work was started. William Cavendish was the then Governor-General.”

This is highly questionable on many levels. First of all, the location. This palace is located right on the western banks of the Bhagirathi. We all know that Bharat (in fact all civilizations) is a river centric civilization. It is impossible that the banks of such a river like Bhagirathi would be left virgin. So what was there before where now exists the so-called ‘Kila Nizamat’ complex? The history drawn up by the Mughals suggests that the western banks of the Bhagirathi was a virgin land, where the foundation for a city named Makhsudabad was laid by Akbar. So basically Akbar cleaned out the forests and created a city out of scratch, right? That is ridiculous on 3 levels. Number one, the ancient capital of Gauda Banga or Shasanka’s Gour was Karnasubarna. Karnasubarna is located about 20 kms away from Murshidabad. It is quite inside the mainland, well certainly far deeper than the city of Murshidabad and Azimgarh (Dahapara, on the eastern banks of Bhagirathi). The ruins of Rakta-mrittikā Mahavihara has been found in a place called Rajbari Danga, which is at least 2000 years old. So civilization existed in Karnasubarna hundreds of years before Islam was concocted by Prophet Muhammad. The Mughals arrived in the first quarter of the 16th century and Akbar ruled the middle of 16th century to the beginning of the 17th century. So even if Akbar founded this so-called Maksudabad the very first day of his reign, it still doesn’t make sense as to why a Buddhist Mahavihara would be built so deep inside the mainland of Karnasubarna and the fertile banks of the Bhagirathi would be left unoccupied.

[In order to get a better idea of all this, the writer suggests that the reader goes through the “Changed Names of Places” in this site, where the reader will find out how Baluchar became Jiaganj and Brahmapur became Bahrampur and then got further anglicized to Berhampore.]

ii) “Kila Nizamat or Nizamat Kila (English: Nizamat Fort) was the site of the old fort of Murshidabad. It was located on the present site of the Hazarduari Palace, on the banks of the Bhagirathi River. The fort was demolished to build this grand palace.”

Yet another self-attested fact by the historians. This fact can be found on the most accessed fact checking site Wikipedia with a defunct reference of “404 error page not found”. None of these facts have any background reference to them. They were all passed down from generation to generation among the Indian historians, who idle as they were, decided the lesser you question the lesser you’ll have to work!

But if the claim is true that the old fort, which is said to have been made of wood and caught fire twice within the period of 4 years (1842 & 1846 CE), was demolished to build this new palace (the Hazarduari); why wasn’t any efforts made to find out why it was built of wood in the first place by Sirajuddaula, the alleged builder of the old fort? Why would he build a fort of wood when his ancestors had been building palaces and grand masjids with bricks and stones?  (Another bluff, but discussion made on this topic separately, please go through “Occupied Mandirs” series)

Neither was the fort made of wood and neither was it set on fire. A preexisting monument was converted to an Islamic monument (as was the norm in Islamic Bharat) and later history was concocted with the help of the British, who wanted something for themselves in there as well. So some Duncan MacTomDickHarry was given the credit of having designed this palace. Well of course the ancient monument went through a lot of reconstruction and renovation and even extension throughout the ages, so the final outcome before being handed over to the ASI in 1985, had very little signs left of the original structure. However, there is one mystery that if resolved, may open up many new grounds to the origin of this fort. The third floor or the third storey of the Hazarduari has been kept sealed up. Just like several other Islamic monuments like Taj Mahal, this palace also inaccessible points. Why? What are they hiding? Who is this ‘they’? Is it the ASI? Is it someone else? They say it is being used as a store room. A store room for what? What is stored inside that cannot be accessed by anyone? Once all the doors have been opened, we will be reading a different history.

iii) “The masons took only 11 months to complete the current Imambara which is 680 feet long and about 300 feet wide, variable in places.”

How who in their right mind would believe this above claim? How could the masons have completed this grand imambara in only 11 months, with so little technology available? This is what happens when you lie too much, you make stuff up and you have no idea what you’re talking about. Science fiction writers need some knowledge of science, but Mughals and their descendants and the nawabs had no idea about construction. Islam was established in India by means of destruction, hence they have very little idea about building things.

The only thing that was built during or after the Nawabs’ time inside the Kila Nizamat complex was the Murshidabad clock tower. Or maybe the tower existed as a minar for archers to keep an eye around the perimeter of the walled city and the clock was installed later by the British in the 19th century. 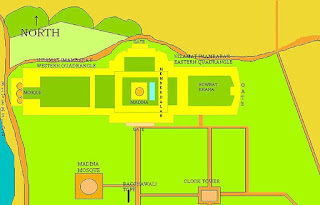