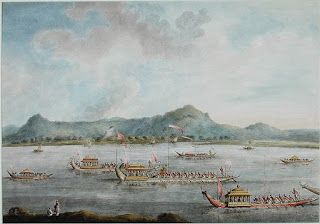 It is said that this place used to be a jungle or a place devoid of civilization before the Mughal emperor Akbar founded it. Now Akbar’s period was 1556-1605 CE. So even if Akbar founded this city in his very first year 1556, or say a few years before coronation in 1551 (when he was 9 years old!), then how would one explain the Bacchewali Tope? It is said that this cannon has been dated to 12th century CE. So that means that someone had it built in the 12th century CE. This someone cannot possibly be a tribal warlord. It has to be a raja or a sultan. Most likely a Hindu raja because the Sultans had just arrived in Bengal in the 13th century. Bengal was under the Sena dynasty throughout the 12th century till Bakhtiyar Khilji attacked and sacked parts of it in 1203 CE. Now the absurd narrative the left-leaning, western and Islamic historians have about this cannon is that it was built by the Mohammedan rulers of Gour. Now the inconsistency still remains in the dating. If it was built in the 12th century, there is no way the Mohammedan rulers built it. Because Gour was captured by the Delhi Sultanate in 1204 CE. Other than the dating, how the cannon travelled from Gour to Murshidabad raises many questions. The cannon weighs about 7657 kilograms. Who carried it to Murshidabad, which is about 150 kms from Gour? Elephants? Any idea how long it’d take and how absurd it is to make elephants carry an object 150 kms? Horses? How many horses would it take to carry something weighing close to 8000 kgs across 150 kms? Boats? Ships? A ship would have been a probability. The narrative continues to say that the cannon was found lying on the sand banks of Ichaganj and it is unknown how it got there. But is there a water route from Gour or Malda to Ichaganj or anywhere near Murshidabad. I ask the readers to contribute here. Is there a water route for large ships to carry over 8000 kgs of cargo from Malda to Murshidabad? If there is, was it likely to carry such a densely heavy object like this cannon on a water vessel?

The answers would point negative mostly. Because this tope didn’t come from Gour and it was not built by the Mohammedan rulers of Gour. It was built by some Hindu Karmakar or Mistri for some Hindu raja.

The Riyaz-us-Salatin[4] credited the initial development of the town to a merchant named Makhsus Khan. The merchant’s role is also mentioned in the Ain-i-Akbari. Now notice the word ‘development’. It was said to have been developed by some Makhsus Khan. Whatever definition development may be in the mind of Ghulam Husain Salim Zaidpuri, it certainly cannot be synonymous with ‘founding’. Makhsus Khan was not the founder of Maksudabad. Makhsus Khan’s name appears as a nobleman who served in Bengal and Bihar during the last decades of the sixteenth century. He was probably the brother of Said Khan, governor of Bengal during the reign of akbar. He built a rest house and surrounded it with shops and the place was called after him Makhsudabad. But this probably a fictitious account. Either this Makhsus Khan is a fictional character or the narrative of the place being named after him is fictional. Or, both.

The area was part of the Gauda/Gour Kingdom and Vanga Kingdom in ancient Bengal.

There is also mention of this place as ‘Morasu’ captured by Yavanas (refers to Muslims in the book) in the Bhramanda section of the ‘Bhavisya Purana’, (which was probably composed in the late sixteenth century.) However, there was a sect called MorasuVokkalu among the Gowdas of Karnataka, who later assimilated with other Gowdas and are now called Vokkaligas. Is there a chance these MorasuVokkalus[1] lived in this place now called Murshidabad? Vanga or Banga has a history of Dravidian settlements as we know.

The exact origin of the word Bangla is believed to have come from “Bong”, a King or ruler of some sort who colonised the area and his descendants were the Dravidian-speaking people ‘Bang’. [2][3]

So these Karnataka Gowdas having settled in Bengal at some point in history should not be a shocking development in history.

According to Abu’l-Fazl, “The original name of Bengal was Bang, and the suffix “al” came to be added to it from the fact that the ancient rajahs of this land raised mounds of earth 10 feet high and 20 in breadth in lowlands at the foot of the hills which were called “al”. From this suffix added to the Bung, the name Bengal arose and gained currency”.  This is also mentioned in Ghulam Husain Salim’s Riyaz-us-Salatin.

Now the point is Makhsudabad or Murshidabad. Was it inhabited by the native population before the arrival of Akbar or not? In fact, was it inhabited by people before the Sultanate or not! The answer is yes. There has been continuous habilitation since the time of Bangs and earlier (see the article on Prince Vijaya in this blog). The city of Morasu had a number of magnificent buildings including the palace of a king situated on the riverbank and in the centre of the city, which was captured by either the sultans and recaptured by the Mughal under Akbar, or it was captured first by the Mughals. Karnasubarna, which was the ancient capital of Gauda or Gour during the time of Maharaja Shashanka, currently falls under the district of Murshidabad. It is about 20-25 kms from the Hazarduari. It is located deep inside the mainland and contains the 2500 years old ruins of the Rakta-mrittikā Mahavihara. Why would people inhabit a place so far from the Bhagirathi river and leave alone an island like flourishing area beside the Bhagirathi river bank? The who narrative about the Bhagirathi changing course every other day is absolute rubbish, concocted by the Islamic intelligentsia or the Mullahs to cover up the real history of the place now known as Murshidabad.

In Valentyn’s* map (1658-64) ‘Moxudabath’ is shown on an island formed by the two branches of the Ganges (one being the Bhagirathi, the other being the Kathi Ganga).

(Also the presence of the black basalt pillars in different monuments of Murshidabad is another pointer at Gour, from where the materials were brought for building these pillars.)

(According to the Mahabharata, the Puranas and the Harivamsha, Vanga was one of the adopted sons of King Vali who founded the Vanga Kingdom. The earliest reference to “Vangala” (Bôngal) has been traced in the Nesari plates (805 CE) of Rashtrakuta Govinda III which speak of Dharmapala as the king of Vangala. The records of Rajendra Chola I of the Chola dynasty, who invaded Bengal in the 11th century, speak of Govindachandra as the ruler of Vangaladesa. [5][6])