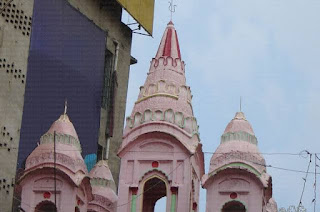 The Temple of Joy Kali (Bengali: জয় কালী মন্দির) in Dhaka, Bangladesh, is situated between Thathari Bazar and Wari, on a road itself named after this temple, at 24 Joy Kali Temple street. Joy Kali Temple is a Hindu temple devoted to Goddess Kali Ma. People of Hindu religion of every age come to this temple to worship Goddess Kali. The statue of Goddess Kali is of great significance to the Hindus. The visitors and committee members of this temple gather money for occasions, with which Prasad is later distributed among people.

The first caretaker of this Joy Kali Devi was Bancharam Saint, the third caretaker was Panachenand, who suffered a decline, so the responsibility to serve the Devi got into the hands of Bhraman Tanyar. Later the landlords of that time seized some of the land of this temple. Starting from that time the temple started to erode, due to lack of maintenance and shortage of money. This temple was damaged during the communal riots of the 1990’s. The temple was renovated later on by the devotrrz. Now the temple is much smaller than it was when it was first established. The temple was burgled and valuables looted by thieves in 2010.

Inside the premises there are two temples. One of the temples is of Kali, the other one, which has a dome, is dedicated to Shiva. The dome is made out of plaster and is visible from outside. Locals of that area refer to this dome as the Joy Kali Temple. The front of the temple complex is a busy stop for human haulers that go into old Dhaka. The temple has tiles on the walls all around, and the floor is made out of mosaic. There are pictures of Hindu Gods and Goddesses printed on the tiled walls of the temple. The entrance to the temple is welcomed by a logo made of stainless steel saying ‘Om’ (Aum) which is a Hindu divine symbol. In front of the Kali statue is a bell hanging from above, it is a ritual to ring the bell after entering the temple and before leaving.