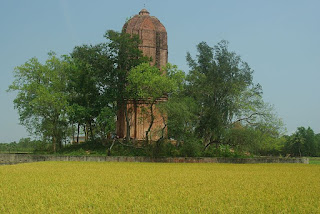 The Jatar-Deul stands isolated on a small hill in the surroundings of the locality Kanakan Dighi, about 5 km east of the small town of Raidighi in the Mathurapur II community development block in the Diamond Harbour subdivision of the district of South 24 Parganas in West Bengal; whether it is in the vicinity of the temple, formerly a village has given, or whether it is a regional pilgrimage center, is unclear. 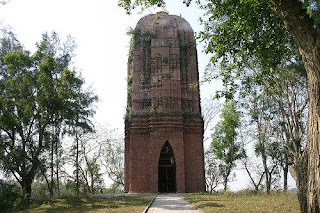 On the client, and thus also on the emergence time of the temple, nothing is known. Some of the researchers(ASI) due to its location being in the vicinity of the discovered copper plate with an inscription from the 10th century, date it to the 10th-11th century CE, however the copper plate does not refer to the temple in any way.

There is neither a cult nor any other sculptural or inscriptional evidence available. The consecration of the temple is also unclear, some believe it was originally for a Buddhist structure; others see it as a building in honor of Shiva/Mahadev.

There is only one tower, which about 30 m high  (rekha-deul) with an internal approximately 3.10 m × 3.10 m mass. Windowless cella, brick temple stands on a square base of about 9,30 × 9,30 m. Noteworthy are the rekha-deul usual steep proportions, the several cornices on the high ogival portal and vertical gradations in the upper part somewhat alleviated by a dome-shaped curvature of the construction developed only in the last meters.

According to the List of Monuments of National Importance in West Bengal Jatar Deul is a monument of national importance.

A fair is held and a horse race is organised on 2nd Baisakh (mid April) every year near the temple.