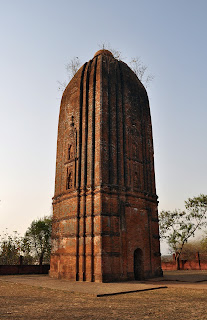 Ichhai Ghosher Deul, also called tower temple (rekha-deul), is located near Gourangapur of West Bengal. It belongs to a small sub-group of Bengali temples, the architectural suggestions from Odisha can be traced back. 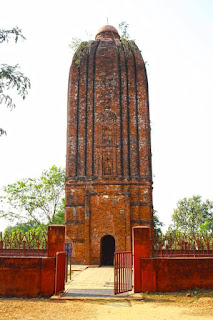 The Ichai-Ghosh-temple is largely isolated by the river Ajay in the vicinity of the locality Gourangapur in the Paschim Bardhaman district, West Bengal.

Gourangapur is a village in Kanksa CD block in Durgapur subdivision of Paschim Bardhaman district, West Bengal. The place has links with Ichhai Ghosh, king of Gopbhum, and it is believed that his capital, Dhekur, was located nearby. The area was earlier a part of Senpahari pargana.

According to Binoy Ghosh, whether it has been in the vicinity of the temple, formerly a village, or whether the temple was a regional pilgrimage center, is unclear. 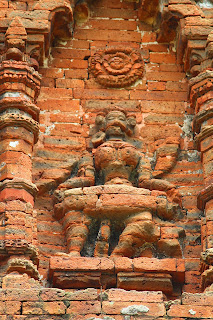 Sculpture in Ichhai Ghosher Deul at Gourangapur
According to Binoy Ghosh, Gopbhum, spread over a part of the present-day Purba Bardhaman and Paschim Bardhaman districts, had two Sadgop kings – one ruled from Amrargar and other from Dhekur (also known as Trisasthigar), near present-day Gourangapur. A little prior to 1833, a copper edict issued by Iswar Ghosh (popular as Ichhai Ghosh) was found at Ramganj in Dinajpur district. As per the copper edict, Iswar Ghosh was son of Dhabal Ghosh, grandson of Bal Ghosh and great grandson of Dhurta Ghosh. However, according to the Dharmamangal poems, Ichhai Ghosh was son of Som Ghosh. In spite of the differences, there is both literary and historical support for Ichhai Ghosh. He was the king of a subsidiary (samanta) kingdom, forming a part of Gopbhum, in the 11th century and was a contemporary of Mahipala, an important king of the Pala dynasty. Ichhai Ghosh was possibly more than just a regional power, because the copper edict shows that other kings in the area listened to him. It is possible that Ichhai Ghosh could carve out a large kingdom because Mahipala was kept busy by external pressures from the Chola dynasty of southern India and Kalachuris of central India.
The Dharmamangal poems speak of a battle between Ichhai Ghosh and Lau Sen, who was king of another subsidiary kingdom in the Medinipur area. The battle was fought at Kandunedanga on the south bank of the Ajay. The Dharmamangal poems mention a king Harishchandra but it is difficult to trace him historically. (Not to be confused with the legendary king Harishchandra mentioned in ancient Hindu texts).
On the Client, and thus also on the emergence time of the temple, nothing is known. Dating from the 7. up to 11. Century circulate as well as construction times from the 16. up to the age of 18. Century.
According to Binoy Ghosh, Ichhai Ghosher Deul is one of the few rekh-deuls in Bengal. Scholars date it around 16th-17th century and it was possibly erected by the descendants of Ichhai Ghosh, to perpetuate his memory.
David J. McCutchion mentions Ichhai Ghoser Deul at Gourangapur as a large smooth curvilinear rekha deul, having a base of 20 feet square. It is a plain brick structure but for niches and images on tower.
According to the List of Monuments of National Importance in West Bengal, the Ichhai Ghosh Temple is a monument of national importance.
Shyamarupargarh, is located nearby, deep in the forest. There is no trace of the temple of goddess Bhavani built by Ichhai Ghosh, but there is a small temple probably built later. Near Shyamarupargarh, the ruins of a huge building are there in the dense forest. Locals believe the ruins to be that of the palace of Ichhai Ghosh at what once was Dhekkuri or Dhekur, Ichhai Ghosh’s capital. 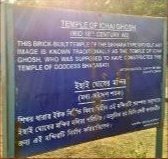 The only one is about 18 m high tower (rekha-deul) with screen top (chhatri) and an internal, windowless Cella (garbhagriha) existing brick temple stands on a nearly square base of about 9,10 × 9,00 m; the basic dimensions of approximately 4.50 m high Cella, in contrast, amounts only to about 2.50 × 2.50 m. Noteworthy are the – however, for a Rekha-Deul usual – steep proportions in the lower part by a plurality of cornices are arranged, whereas in the upper part only vertical gradation find. A dome-shaped curvature of the construction developed only in the last meters.

The austere round-arched portal, is of a rectangular frame enclosed; each of the two niches in of amalaka and kalasha – crowned fields of the upper Zone show on all four sides of polyfoil arches and not further identifiable figures of gods. Bright plaster residue on the outer walls point to the fact that the temple was temporarily plastered.