How Durga Puja is celebrated in Kolkata and its Cultural Significance 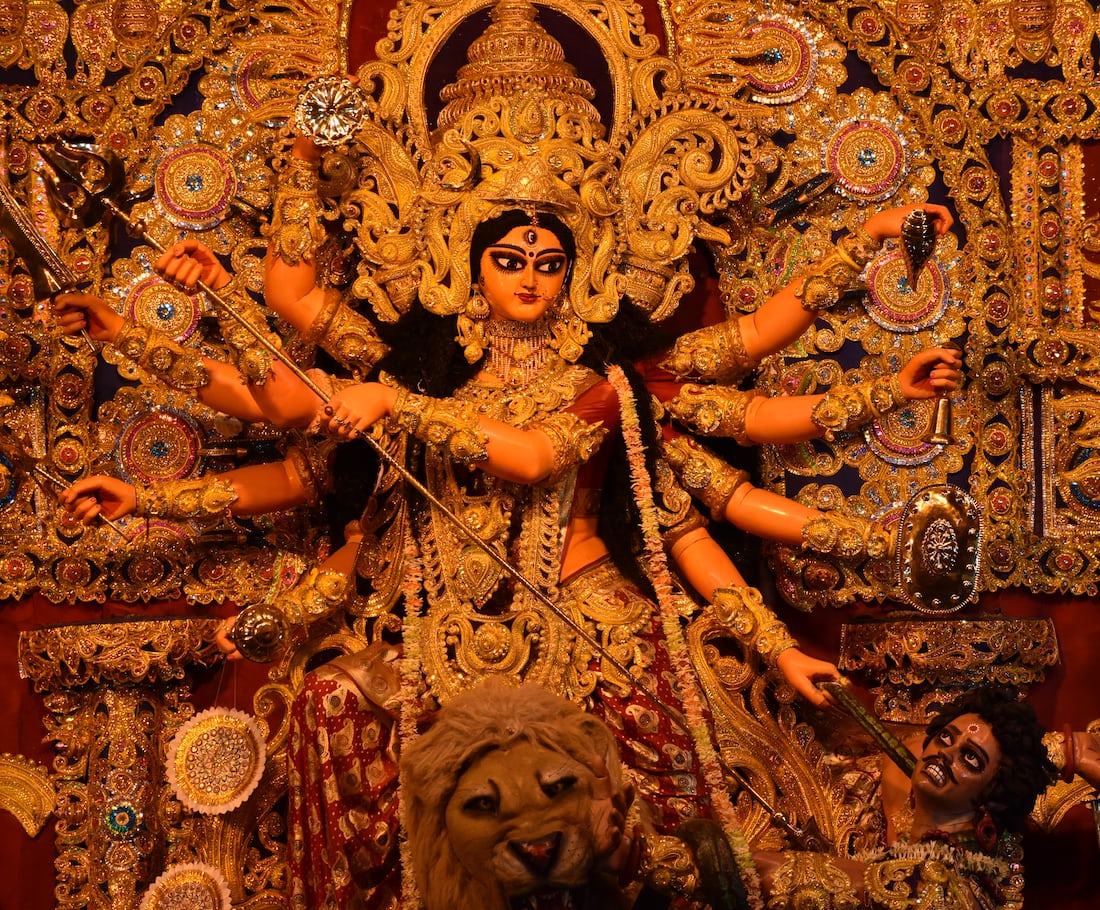 How Durga Puja is celebrated in Kolkata and its Cultural Significance

India is a land of festivals, more so Bengal where the common refrain of ‘Baro Maash, Tero Parbon’ (Twelve Months with Thirteen Festivals) is part of popular culture. The most popular festival is Durga Puja, which is in line with the festive season in India.

To understand the significance of Durga Puja, one has to delve into certain aspects of life in Bengal.

The middle and end of September (as per the English Calendar) is usually the last week of the monsoon, which would have normally ensured a full complement of Kharif crops of rice, wheat etc. This would result in prosperity for farmers, traders and entrepreneurs who even today, form a sizeable portion of India’s GDP. More so in a fertile agrarian state like Bengal. With the end of the monsoon, it is time for festivities to begin.

astrologers, priests and men of learning at all times. The day of Mahalaya is marked by early morning prayers.

In Bengal, the prayers were led by the legendary Birendra Krishna Bhadra (1905-91), an accomplished playwright, actor and radio broadcaster whose precise Sanskrit pronunciation of the Mahishashura Mardini was staple to millions. The rest of the day saw rituals called Tarpan at village rivers, ponds, waterways where people paid homage to their departed ancestors. The most crowded ghats were in Kolkata where the Hooghly River was packed to the brim with people, who went waist deep in water facing the rising sun to the east and offered water to their ancestors. Note that Hooghly River has almost 200 Ghats of various sizes and locations, with each of them having a purpose.

At this point of time, it would be proper to see Durga Puja in juxtaposition with Navratri in the rest of India. The change of seasons is marked by Navratri which is typically ‘nine nights’ in the waxing phase of the moon in the ninth month of the Hindu calendar.

The Hindu calendar is a combination of the solar and lunar calendar and thus adjusts automatically over 33 days every 3 years. Mahalaya is a new moon day, and over the next nine days the moon waxes a little every day. Every 19 years Durga Puja is celebrated at the fag end of October to adjust the calendar and accommodate the ‘extra month’ which is called Molo Maash’ (the extra month). In the last eighty years Durga Puja was celebrated at the end of October in 1944, 1963, 1982, 2001 and 2020.

Traditionally, Durga Puja is celebrated in the first five days in the month of Kartik. The month of Kartik is the seventh month of the Bengali Calendar and denotes the onset of autumn and a change of seasons.

The first five days of the month of Kartik (as per the Bengali calendar) see a gradual uptake in the festive fever. The streets of the main cities, more specifically Kolkata, are marked by massive traffic jams as people shop for new attire. So enjoy yourself during the Pujas or to go out of the city which becomes a frenzied cauldron of emotions, planning and activity.

By the end of the fifth day or Mahapanchami, the stage is set for the most festive four days of the year. The tradition of Navratri starts from the Ramayana, when the great battle in the island of Lanka took place between Rama (an avatar of Vishnu) and Ravana, a demon king with vast accomplishments who nevertheless found himself on the wrong side of Dharma. Another interpretation is the killing of a demon called Mahishashur, who came to battle riding a buffalo and in the course of 10 days, was killed by the Goddess Durga. The start of the battle is commemorated with Mahalaya, the beginning of Devi Paksha when the Goddess of Shakti comes in various forms to fight evil.

Whether Durga in Bengal, Ambe in Gujarat/ Maharashtra, Sherawali in Punjab/ Haryana, all of them are the manifestations of Shakti and celebration of the purest form of womanhood.

Mahashashti marks the sixth day of the festivities. The murtis of Durga are made in the Kumartuli locality of North Kolkata for two hundred years. For a brief while in the 80s there was a trend of modern murtis but has again gone traditional.

Mahashashti is the day when the murthis are brought to life (Devi Bodhan) by the priest. Brief Pujas are conducted on the day as a curtain raiser and the evening of Shashti itself is a rehearsal for the festivities of the next three days. Three days is a misnomer as there is no day and night and double/triple activities are packed into these three days.

Mahasaptami marks the seventh day of festivities. Morning is marked by Pushpanjali, at specific times as per the priest’s instructions and evening by Sandhya Aarti. The rest of the day is devoted to a uniform holiday mood – spending time walking in the crowds, eating out, catching up with friends or staying at home, catching up on reading the latest Dan Brown thriller or listening to Led Zeppelin Live on loop. The crowd is high through the day but evening tends to be even worse. There are no specific dietary requirements.

Mahashtami marks the eight day of the festivities and the absolute peak of the celebrations. The Ashtami Pushpanjali is supposed to be the most auspicious of the ten days. Every one dresses up in new clothes on this day. Once again, the crowds increases as the day goes by. The moon is now prominent in the autumn skies, though of late with the delay in monsoons, rains during Pujas are also common and cause havoc with the artistic Puja Pandals.

Various themes of Puja Pandals predominate, based on the Bengalis awareness of the world around. Buckingham Palace, White House, Taj Mahal, Parliament House.

Of late there is an intent to retain the Pandals as permanent exhibits, being objects of popular culture. Lighting is another aspect of the Pujas– commemorating memorable events of the last year, memorable happenings with utmost creativity. A big aspect of Pujas is the social aspect–romancing, breaking up and patching up by teens and youngsters.

Food on Ashtami day is always vegetarian. The cusp of the eighth day and the ninth day of Navami is marked by Sandhi Puja, an offering of 108 lamps and lotuses. Cusp timings are decided by the priests.

Mahanavami marks the ninth day of the festivities, and again a joyous celebration of the festival. The significant aspect of Mahanavami is sacrifice, whereby in earlier times a buffalo and/ or goat were sacrificed. In some cases, the sacrifice is symptomatic of the killing of the mount of Mahishashur, a buffalo. However, with the increase of animal rights and activism, it is not considered proper to sacrifice an animal but it is definitely considered auspicious to have rice and goat curry on this day. The sale of Biryani increases leaps and bounds on Navami, with online orders exceeding 150 per minute (as opposed to the 90-95 on normal days). And on the evening of Navami, the celebrations go even higher and the last revellers go home in the early morning.

Bijoya Dashami is the last day of the festival and marked by huge outpouring of emotion as it is time for the festival to wind up. Married women celebrate the morning of Bijoya Dashami with Sindoor Khela, or smearing vermillion on each other’s faces as a celebration of womanhood. By afternoon, arrangements for immersion of the idols are made.

In today’s times, immersion again is a sensitive issue and there is a huge damage to water bodies from the clay, straw making up the idols. Novel solutions come up but there is nothing to beat immersing the idols in the Hooghly River and feeling incredibly sad as the festival comes to an end.

Bijoya starts thereafter, with meeting elders and seeking their blessings for the next year ahead. The peers do a three-step hugging exercise (called Kola Kuli) and with seniors, there is a touching of feet in the time-honoured tradition. There is a round of offering sweets and snacks to continue the eating tradition of Puja (at conservative estimate, about 11 million egg rolls are consumed over the 4 days of Puja in Kolkata).

In the next four days, all shops and establishments are closed to give a respite to employees and people who have been working during the Pujas. Offices reopen but many people take this opportunity to take a brief vacation or staycation. Most Puja committees hold their cultural programs around this time with professional artists.

Lakshmi Puja is quiet, the fifteenth day of Kartik, when the glory of the full moon lights up the clear, rain-washed skies of autumn. In Karnataka and Maharashtra, this is Kojagari Purnima.

The countdown now starts for the next big festival which is truly all India namely Diwali. In Bengal, Diwali was not celebrated as a festival but as Kali Puja, to commemorate the night when Goddess Kali (the occult form of Shakti) was stopped in her tracks on a moonless night by the supine body of her consort, Lord Shiva. She is depicted as biting her tongue in embarrassment and wearing a garland of rogues she has beheaded with her sickle. A fair commentary on Bengali women who are amongst the feistiest all India and reverse the tables on their menfolk!

A few pointers are worth noting

The festival of Karva Chauth is purely North Indian, but over the last twenty years is being celebrated by Bengali women, under influence of Bollywood and Television serials. There is also now frenzied buying of gold on Dhanteras in the same manner as North India. These are modern trends which show themselves and are add ons to the festive season which goes on till Jagadhatri Puja (occurring 10 days after Diwali/ Kali Puja) i.e. the last leg of Durga Puja festivities.

It is a celebration of the reincarnation of Goddess Durga as Parvati carrying the world on her shoulders. Jagadhatri Puja occurs all over Bengal and Odisha but is a celebration with certain local areas like Chandernagore, Serampore, Krishnanagar and Santipur (Nadia District). It is marked by grand display of lights in these places. This is the last Hindu festival in the year till Vasant Panchami.

And so the cycle of seasons and festivals go on, like a river rolling in majesty till eternity even as people come and go.

Author Shri Tapan Ganguli (age 81) is an Economics Graduate who joined IAS in 1964. Post a strong government career in various ministries, he took pre-mature retirement and worked in the Corporate Sector, leadership roles till 2000. He is based in Kolkata and interests include Culture, Current Affairs, International History, Personal Finance, Architecture and Photography.