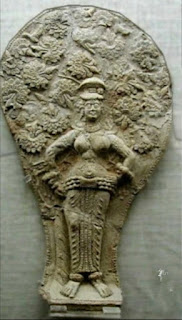 Exquisite terracotta objects (c. 200 BCE) from Chandraketugarh, in West Bengal, India. Chandraketugarh was one of 11 urban settlements surrounding Bengal in pre-Mauryan India. From the excavations and field studies it can be assumed that it probably came into prominence around 1000BCE and remained populated until the Pala-Sen dynasties (12th century CE). The site contains six phases of ruins.