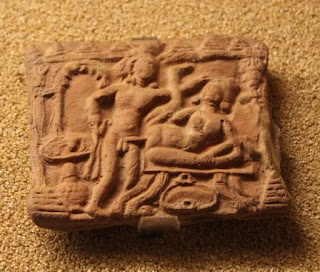 An couple engaged in ritualist sex which can be inferred from vessel under the bed.

Sexual depictions on temples and caves started appearing in Bharat in the 10th century. Before that Vatsayana wrote the Kamasutra some time during the 2nd and 3rd century. However most of the erotic plaques unearthed from the ruins of Chandraketugarh belong to the BCE era. It can be inferred that the Gangaridae or GangaHriday (Hriday = heart) civilization had reached civilizational peaks long before all other civilizations and hence no kind of sexuality was considered taboo to such extent that it could not be portrayed or displayed. This could be a reason why Hindu shastras and puranas do not speak much of Gangaridae…but that is only an inference for which the writer of this blog is solely responsible.

There could be many other reasons why Chandraketugarh has not been documented in the Hindu shastras, or puranas or epics.