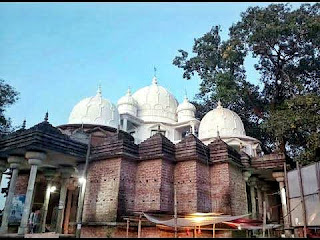 Frontal View of the Chinispur Kalibari

Located about 1 km west of Bhelanagar Bus Stand, the Chinishpur Kalibari is a 250+ year old Hindu temple.  This temple is said to have been built by Hindu saint Ram Prasad. He got financial support and land from a person name Ramkrishno Ray, who was a Dewan of G.P. Wize (Last Kuthial of Atkandi Nilkuthi).

[According to a different account, this temple is over 400 years and was rebuilt and renovated by Ram Prasad.] 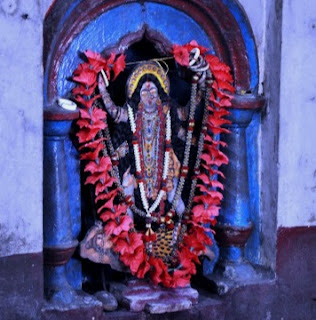 The vigraha of Devi Kali inside Chinishpur Kalibari.

The exterior walls of this rectangular platformed temple is decorated with flowers and animal figures. The vigraha of Mother Goddess Kali is kept to North-side of the brick wall inside the temple. The vigraha is supposedly 400+ years older and the Stela is made of stone. 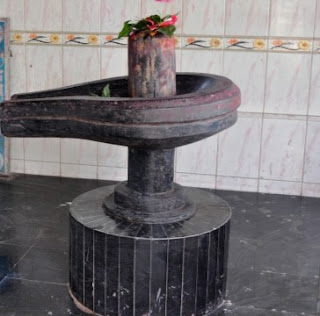 The Shiva Linga inside the Shiva temple

On the front side of this ancient temple, there is a Shiva temple, as is the custom with Bengal Shakti temples. There is an ancient Banyan tree  just beside the temple. 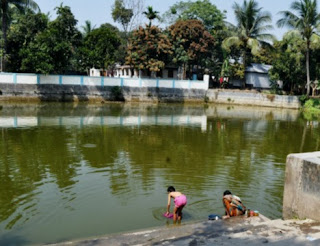 The customary mandir ghat or pond lies on the western side of the temple. It is quite large and well bounded by concrete ghats.

This temple becomes festive every year in the Bengali month of Boishakh and Jaistha. A local fair is held for 3-4 days inside the temple premises, which features an extensive collection of local arts & crafts and is visited by people from afar.

In 1988, President Hussain Muhammad Ershad, amended the Constitution of Bangladesh and declared Islam as the state religion ofthe country. This gave a free license to the radical Muslims of Bangladesh to do wholesale persecution of Hindus and other minorities.

This rumour gave way to an anti-Hindu pogrom in Bangladesh, which was marked by widespread destruction of Hindu temples and violence against the Hindus.

Muslim mobs rampaged all over in Bangladesh, targeting Hindu areas and temples. Hindu homes & businesses were burnt down. Many temples were vandalised, demolished or burnt down and Vigrahas/murthys were broken and thrown out. The mandir purohits (priests) were beaten up and some were even murdered.

The rumour was circulated throughout Bangladesh with the help of The Daily Inquilab on October 29, 1989 and the violence began almost immediately. The violence reached its peak on November 9-10, after the “Shilanyas” ceremony at Ayodhya, UP, India.

The BNP led Bangladesh Government backed this operation for over two weeks before finally calling it off. After the people of Bangladesh realized that it was all a rumour, the government tried to cover up their involvement by ordering to repair a handful of temples.

The Chinishpur Kalibari was among the temples that were destroyed and set on fire.

The temple is being reconstructed and expanded, with a new building being built around the main building. It is expected to become an exclusive Kali mandir of Bangladesh as 80 million BDT has been sanctioned for this temple.