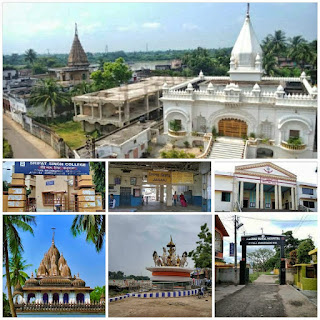 Located on the eastern bank of the Bhagirathi river, in Murshidabad district, Jiaganj is the converted name of the ancient Hindu-Jain town of ‘Baluchar’.

After capturing Bengal and the kingdom of Mokshapur, the Mughal empire went on to Islamize a certain few things under the relatively moderate Akbar. The name of Mokshapur, a relatively small kingdom was changed to Maksudabad, while Baluchar, a township along the banks of Bhagirathi was renamed to Jiaganj.

The twin towns of Jiaganj and Azimganj, located on the opposite sides of the Bhagirathi river and not too far away from ‘Karnasubarna’ (capital of Shashanka’s Gour empire) had been important trade centres of Vanga from times immerial. While the trade remained during the Subah reign in Bengal, much of the indigenous history was wiped off from memory as Hindus made the mistake of not extensively documenting it.

It was also a holy place for Vaishnavas during the early periods of Vaishnavism and was also called the Varanasi of Bengal during the reign of Rani Bhabani.

There are many ancient Hindu mandirs and relatively less older Jain Deuls on both banks of the river.

One of the most obvious signs of Sasanka’s reign is the presence of ancient Shiva temples or Shiva Lingams. Since Vanga and its neighbouring states were dominated by tribals (Shaktas and others), the abundance of Shiva temples in Murshidabad and Malda, may most definitely be attributed to Sasanka, who was a renowned Shaivite and did much to spread Shaivism. The merging of Shaivism* with Shaktism was most probably his doing as well.

Shibtalaghat for example is a locality in jiaganj (near to Bhagirathi), which holds an ancient Shiva temple.

‘Bhattapara’ is yet another locality that holds remnants of an ancient Hindu civilization.

This town was home to the Bhattas (currently  Bhattacharyas), who had been living here from 350 years before the arrival of Murshid Kuli Khan. The Bhattas or Bhattacharyas, who were “Pashchatya Vaidic Brahmins”, originally from Kanauj (UP) continue to dwell here. It is heard that they came during the reign of the Sen kings (Ballal or Lakshman). There is an ancient Laxmi-Narayan Dev mandir adjacent to their abode and they have a trusty of Sebayat among themselves. Their houses are now in dilapidated conditions.

Then there is Debipur, a small neighborhood located on the banks of Bhāgirathi-Hooghly river, which is traditionally known as ‘Ganga’. Debipur as one can clearly tell by the name was named after Devi Durga or Kali.