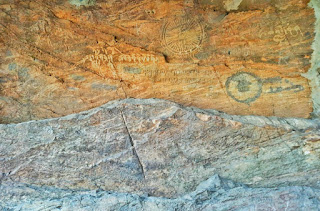 Located strategically on the top of the Susunia hills, king Chandravarman’s fort and inscription assumably belongs to the 4th century CE.
Chandravarman son of Simhavarmana, was a king of the Pushkarana kingdom, during the 4th century CE. Pushkarana currently falls in the Bankura district of West Bengal.
The kingdom was established before the advent of the Gupta Empire, and was located to the west of the Samatata kingdom of eastern Bengal. Chandravarman extended his kingdom to the east towards the Faridpur district.

According to an inscription on the Allahabad pillar by Gupta emperor Samudragupta, Chandravarman was defeated by Samudragupta and the area became a part of the Gupta Empire:

The defeat of Chandravarman paved the way to Gupta suzerainty over Bengal. 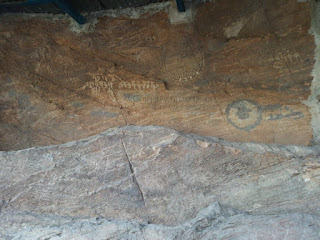 The inscription on the Susunia hill, refers to a place called ‘Pushkarana’, which was once the capital of Chandravarman.

Modern-day Pakhanna is considered to be ancient Pushkarana. Pakhanna (or Pokharna) is a village in the Barjora police station area of Bankura Sadar subdivision of Bankura. It is located about 40 kilometres north-east of Susunia, on the southern bank of the Damodar river.

The extent of Chandravarman’s dominions may have been more or less coterminous with ancient Rarh region or south-west Bengal. It is the place mentioned in the Susunia inscription and dates back to 4th century AD. 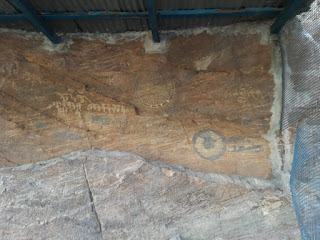 The rock-edict reads that- The devotee of ‘Chakkaswami’ (Lord Vishnu), the King of Pushkarana, son of the King Simhavarmana, King Chandravarmana offers the revenue of the village named ‘Dhoso’ for the purpose of worship to his Lord Vishnu. There is a symbol of ‘Wheel’ or ‘Chakra’ near the rock-edict and towards the lower left side of the wheel, there is another line written in a script, not deciphered yet, probably the obscure ‘Samkhalipi'(Conch shaped Script!), as opined by some experts.

Susunia Hill is a known archeological and fossil site. Fossil remains of Asiatic lion, giraffe, hyena and other animal species have been discovered from areas around. Possibly the oldest rock inscription of West Bengal is located here.

Susunia Hill is also a popular spot among rock-climbers and campers.