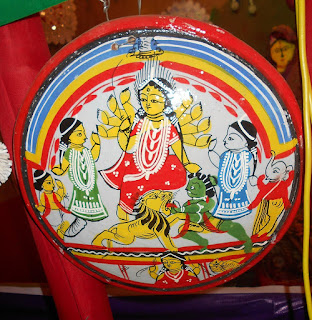 Durga Sara. An aspect of Bengal Patochitra. Depicting Maa Durga on a lion slaying Mahisasura along with Lakshmi, Saraswati, Kartik, Ganesh and Shiva above her head.

Patochitra or Pattachitra is an ancient folk art form originating in the eastern Indian states of Paschimbanga (West Bengal) and Odisha.

This traditional, cloth-based scroll painting is known for its intricate details and depictions of puranic narratives and folktales or lokgathas inscribed in it.

In Odisha the Pattachitras were originally created for ritual use and as souvenirs for pilgrims to Puri, as well as other temples. In Paschimbanga, they were originally used as a visual device during the performance of a song.

Patochitras are known for their excellent play of color. This art is mostly tucked away with small villages of Purulia, Bankura, Medinipur, Hooghly, Howrah, and 24 Parganas.

In his book Folk Art of Bengal, author Ajitcoomar Mookerjee has mentioned that there are some Jadu-Patuas painting of mural style in the temples of Bankura District.

The Patochitra Shilpa (art) can be traced back to the Pre-Pala period. This assumption is made based on the historical themes of the paintings and the accompanied songs or Patua Sangeet.

Bengal Patochitra is referred to in the Buddhist literatures of the 1st century CE, in the Haribansha of the 2nd century CE, in Abhigyanashakuntalam and Malavikagnimitra of the 4th century, Harshacharita in the 6th and Uttararamacharita in 7th-8th centuries. Hence it can easily be assumed that the Patochitra shilpa is over 2000 years old.

The theme of the Patochitras can be both religious and secular. Religious pats encompass the story of Puranas and Hindu epics or itihasas like Ramayana and Mahabharata, which narrate the stories of Krishna, Chaitanya, Kali, Shiva and the indigenous Bengali folklore of Manasha and Chandi, Behula and Lakhinder being the most popular. The secular pats depict important news events, scandals, accidents, rural elections, the rationing system, family planning, societal problems or social evils etc.

Every Patochitra has a song related to it, which the artists sing while gradually unfurling the Patochitra. Singing pot in Bengal is called Patua Sangeet. Patua Sangeet or Poter Gan is a cultural tradition of the singing Bengal Patochitra. The artist performing the song is called Patua. It is famous in districts like Birbhum, Jhargram, Bardhaman and Murshidabad as a folk song of Paschim Banga.

Bengal Patochitra painting has various motifs and aspects that unfold ancient Bengali culture and history. Depicting stories from the itihasas (Ramayana, Mahabharata), puranas etc. and using natural color, is one of the individual characteristics of the Bengal Patochitra.

Chaalchitra or chala chitra is a part of the Bengal Patochitra art. It refers to the Debi Chaal or Durga chala, the background of the Durga Pratima. The Patuas or the chalachitra artists call it Pato Lekha, means the writing of Patochitra.

300–400 years old pratimas or murthys of Nabadwip Shakta Rash used Chaalchitra as a part of Pratima.

Durga pot or Durga sara is worshipped in the Hatsarandi Sutradhar society of Birbhum district during Durga puja. This type of patochitra is also worshiped is Katwa. Durga Pot has a semi-circular Patochitra where Durga is in the middle position. Ram, Sita, Shib, Nandi-Vringi, Brahma, Vishnu, Shumbha-Nishumbha are painted around her.

Krishnanager Rajrajeshwari Durga is seen to be uniquely noticed. In the middle of the Chaalchitra, there is Panchanan Shiv and Parvati is beside him, on one side there is Dasha-mahavidya and the other side, there is Dashavatar.

The Patochitras of different districts of West Bengal are distinctly different from one another and can be characterized by the many peculiarities in design and color.

The densely packed compositions in the patochitra of Purulia (Manbhum) can easily be distinguished by their preference for one particular shade of burnt sienna relieved by yellow and white patches.

The pats of Medinipur can identified by their depiction of Dasaratha and Chand Sadagar in seated positions, the Kamale-Kamini and Ramayana scrolls.

The chitrakars of Birbhum, Bankura and Bardhaman, prefer to use the Indian red or vermillion color for the background.

The pat scrolls of Hooghly can be identified by their use of the dark brown color.

The abstract linear treatment in the pats of Hooghly and Manbhum are unique and modernistic in approach.

Bengal Patochitra is created using natural colors only. It is one of the characteristics of the Patochitra. Colors that are mostly used include red, green, brown, yellow, blue, white and black. White color is made with chalk dust, yellow from pauri, cultivated indigo is used to make blue, bhusakali for black, mete sindur or vermillion for red.

The Patua artists of Bengal wear their occupational surname or title which is ‘Chitrakar’. They can mostly be found in the village of Nayagram of Medinipur district. Prominent artists include Khandu and Radha Chitrakar and their children, Monimala etc.  Monimala has created her own unique style by using bold, primal colours.

Patochitra of Nayagram(WB) is now collected in National Museum of Ethnology (MNE) in Lisbon.