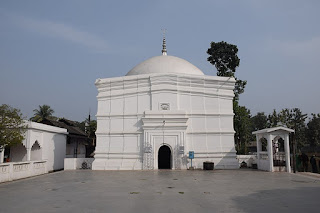 The current state of the Baneshwar Shiva Mandir

Located in Cooch Behar subdivision of Cooch Behar district (WB), the Baneswar or Baneshwar Shiva Mandir is an ancient Hindu temple of India.

It is about 10 kilometres (6.2 mi) from Cooch Behar and is located near Baneswar railway station on the Alipurduar-Bamanhat branch line. 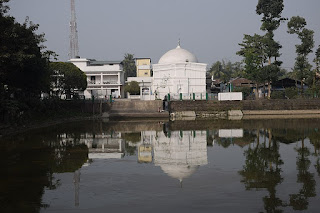 The Mandir across the pond

The antiquity of the Baneswar Shiva mandir is mired in mythology. According to popular belief the legendary Raja Banasura, an ardent devotee of Shiva had made the latter agree to come down to earth. When Shiva was following Raja Banasura, the latter suddenly stopped at Baneswar (earlier name Gordasandara), which was a breach of agreement. Shiva instantly disappeared and later Banasura established a Shiva-linga on the banks of the Bangti River. Many believe that the place was named after Banasura.

According to a more historic belief, the temple was built by King Jalpeswar, who also built the Jalpesh temple. He is believed to have ruled in the 2nd or 3rd century CE and is mentioned in ‘Jalpesh Mahatya’.

King Nilambar of the Khen dynasty had it reconstructed and renovated.

Maharaja Nara Narayan of the Koch dynasty is also said to have repaired the ancient temple in his lifetime. Maharaja Pran Narayan of the Cooch Behar State subsequently revamped it.

The present structure lies on a square base with a single dome (ekaratna) and a slightly curved cornish. It has two entrances – one on the west and the other in the east. The temple has a Shiva linga and a ‘Gouripat’ in the garbhagriha, 3.1 metres (10 ft) below the plinth level. The temple was slightly tilted on the east during an earth-quake in 1897. It has a height of 10.9 metres (36 ft) and the base measures 9.6 metres (31 ft) square. The walls are 2.5 metres (8 ft 2 in) thick. There are some decorated narrow strips on the walls. It has a raised platform in the front. There is a bull made of cement on the right. On the northern side there is a tin shed housing vigrahas of Shiva and ‘ardhanariswar’. There are some other murthys including one of Maa Kali in another shed. There is a big pond nearby with many tortoises. A week-long fair is held during Shiva Chaturdashi. This temple is under the Cooch Behar Debuttor Sangstha.