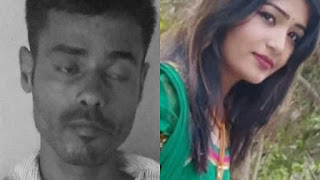 Serious news coming in from Guwahati town of Assam. A Hindu girl was stabbed several times by a Muslim youth for she refused a marriage proposal. Yesterday, the incident happened near the Narengi Military camp area of Guwahati town.

According to locals, Rafiq Ali attacked Anjali Biswas with a sharp knife when she was on her way to work, walking through an ally. Suddenly, Rafiq Ali appeared and started stabbing in hands, eyes, face, neck and belly. Hearing the scream, locals rushed and recovered her. Although Rafiq fled. He was arrested today.

Immediately she was taken to Guwahati Medical College and Hospital (GMCH). On seeing her condition as very serious, doctors took her to the emergency. Later, after a few hours of operation, she is now in ICU. The doctor said, she is in critical now and it will take many days to get fully recovered.

According to locals, Anjali had a relationship with Rafiq. Almost one year ago, She ended that relationship. After that, he was following her and gave her a marriage proposal. But she refused. This might enrage Rafiq. She was also threatened several times. But she didn’t care and carried on with her daily life. But now she is in ICU.