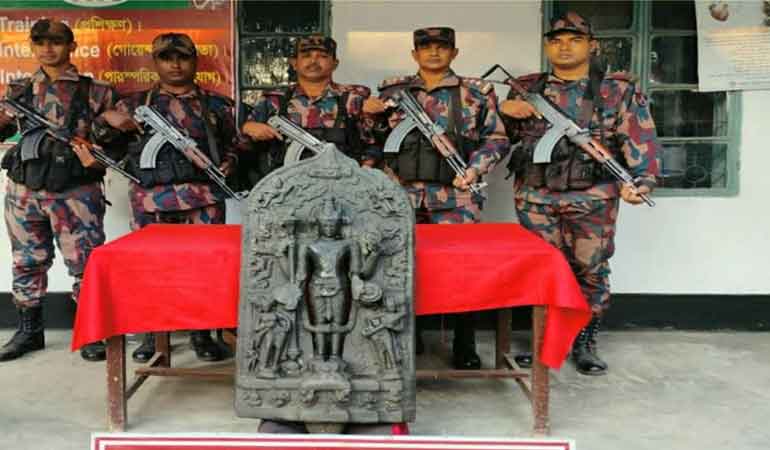 It is reported that on Monday (December 5), a patrol team of Malkadanga BOP of Boda Upazila of the district recovered the Vigraha in an abandoned state from an area called Betbari Sardarpara, 4 km inside Bangladesh of border pillar 774/2-S.

According to BGB, based on information from its own intelligence and civil sources, a patrol team from Malkadanga BOP raided the border area. At this time, the stone Vigraha was recovered from under the straw bale in the Betbari Sardarpara area in an abandoned condition.

The estimated value of the Vigraha is one crore takas! Nilphamari Battalion (56 BGB), Lieutenant Colonel Asaduzzaman Hakim said, the recovered hard stone Vigraha has been kept in the camp. Arrangements will be made to keep it in the museum under the direction of the senior officer.

On the other hand, the angry Sanatani community of Bangladesh is telling the media that, “During Islamic rule, these Vigrahas were hidden underground or in wells by our forefathers to protect them from Islamic invaders.” But after rediscovering these Vigrahas, they are being forcefully taken from us and kept in an unholy situation in museums; the reason for this action is still unknown to us. “So we want to give full dignity to these Vigrahas by re-establishing them in the temple, so that our future generations can study and be aware of their history.”

Previously the Border Guard Bangladesh (BGB) has recovered an ancient Vishnu Vigraha made of rough stone and abandoned on the India-Bangladesh border at Panchagarh district in Bangladesh.

At midnight, members of the Tokapara BGB camp under Nilphamari 56 BGB recovered the Vigraha from a house 500 yards inside the Tokapara border area of Amarkhana Union of Panchagarh Sadar Upazila on 28 October.