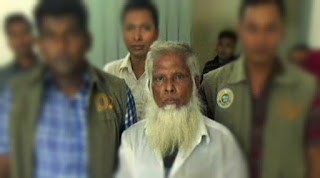 ICT-2 found him guilty in 3 out of 5 charges. He was given death penalty for 2 charges and prison until death for the other one.

International Crimes Tribunal-2, headed by Justice Obaidul Hassan, read out the summary of the 99-page short verdict in presence of the 65-year-old war criminal Forkan Mallik.

He was given death on two charges: rape and murder of a Hindu woman, and abduction and rape of a Muslim women and murder of three including the father of the victim.

Forkan was given prison until death for rape of two Hindu girls in Subidkhali Bazar and deportation of their family including the victims.

The tribunal acquitted him in killing of four, including two Awami League leaders, and forceful religious conversion and subsequent deportation of three Hindu brothers in Subidkhali Bazar.

The three-member tribunal concluded the proceedings of the case against Forkan on June 14 and tabled his judgment for today.

Sabina Yasmin Munni, a member of the tribunal’s prosecution team, said that the verdict reflected the wish of the nation and that she and her colleages were satisfied with the court’s order