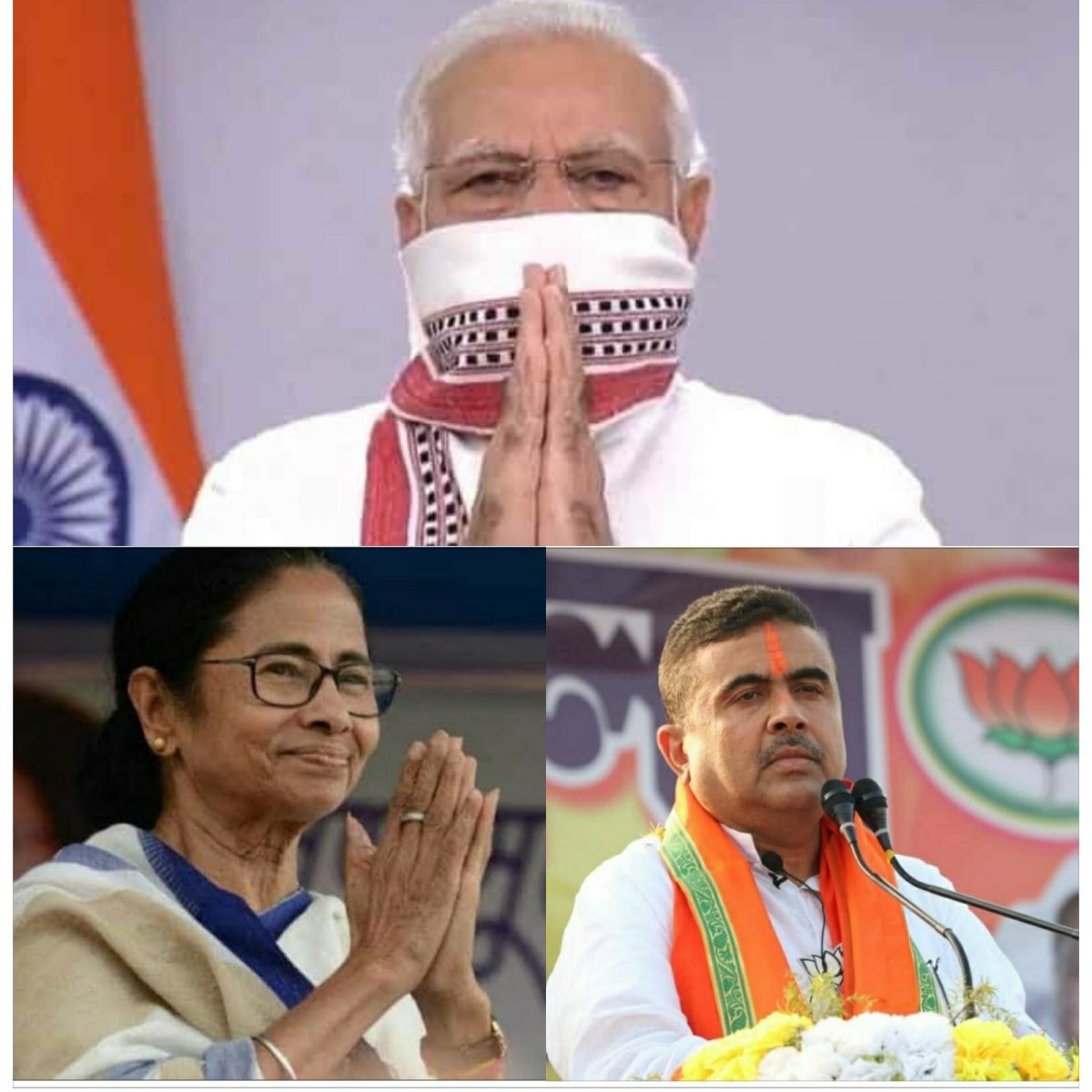 The stage was supposedly set for the BJP in Bengal. 2021 was thought to be the year when the people of Bengal and the BJP finally does away with the TMC. The support for BJP had reached far and wide in Bengal with majority of the people wanting to oust the corrupt Mamata Banerjee led TMC government. The helicopters and convoys kept coming and going. Modiji grew his beard to resemble Tagore many said. The Bengal BJP leaders had already planned for repercussions post-election. The BJP was certain about grabbing 200+ seats. Though that was probably a bit too much for many. However, most surveys had the BJP at 110+ at least. The newest coalition of Left-Congress-Abbas Siddique was supposed to be the wild card and grab around 40-50 seats. That meant that none including the TMC was going to make majority by themselves. But in the end the TMC trumped everybody and ended up with 213 seats in the Bidhan Sabha 2021 leaving the BJP with 77 and the others with nothing… Though this is not really bad result, it is not as good as expected for the BJP. Though the expectation to gain full majority on their part was not at all practical, the people and the media were all certain the BJP was going to grab at least 100+ seats. So what went wrong?

Here’s an analysis of the West Bengal Assembly Election 2021 to highlight the major factors behind the success of TMC and the disappointing result of the BJP.

This is not a ground breaking discovery for sure, but it still came off as a surprise, due to the sheerness of it. Muslims of Bengal absolutely rubbished the likes of Left-Cong-ISF coalition who managed to win only 1 seat while Owaisi’s AIMIM managed to win nothing. It is pretty clear the Muslims of Bengal took this election as a fight for survival and outwitted all schemes of breaking the Muslim votes. Unofficially they’re about 35% (official estimate 30%) of the total population of WB and are majority in the districts of Malda(52%), Murshidabad(67%) and Uttar Dinajpur(50%+) where the BJP has lost to TMC 4:8, 2:18, and 2:7 respectively.
BJP has also lost badly in districts with significant Muslim population like South 24 Parganas (36%), Birbhum (37.5%), N 24 PGS (26%), Howrah (27%) where they lost 30:0, 10:1, 28:5, and 16:0 respectively. However, the bad performance of the BJP has not always been dependent of the Muslim population. They’ve done better in Nadia(27% Muslim) and Cooch Behar (26% M) as they’ve just overcome TMC at 9:8 and 7:2; while they’ve lost in Purba(15% Muslims) and Paschim Medinipur (11% M) by 7:9 and 2:13. The loss at Paschim Medinipur can be derived simply as failure of the party whether organizationally or other and not because of the demography. However, the BJP has done quite well in districts with less than 10% Muslim population e.g. Darjeeling, Bankura and Purulia and also in most of the northern districts e.g. Cooch Behar, Alipurduar, Jalpaiguri.

See the list below for district-wise results with demography (results only for TMC and BJP comparison, doesn’t include other parties) –

As the reader can clearly see from the above table that the BJP has done well in 2 districts of ‘Jangalmahal-medinipur region’ of Bankura and Purulia, while failing to score in Jhargram. They’ve put up a good fight in East Medinipur, owing to the Adhikari family (Suvendu) but have lost while they’ve barely managed to stay alive in West Medinipur with 2 seats while TMC has bagged 13.
BJP has done mostly well in the Northern hilly region where they’ve defeated TMC in 4 out 8 districts quite convincingly and also put up a decent tally in Malda, a district with high Muslim population. In South Dinajpur, both the parties have tied with 3 seats each.
In the Central region, BJP has suffered a massive defeat as they’ve lost 10-1 in Birbhum, the den of social media’s favorite man-bear Anubrata Mandal. They’ve lost in both the Bardhamans quite convincingly and have failed to score in Purba Bardhaman, which is a little surprising. But just a little. They’ve been bamboozled in Murshidabad, which is no surprise but have just toppled TMC in Nadia. The most shocking results have come from the greater Kolkata region which includes Kolkata, North and South 24 Parganas, Howrah and Hooghly, where they’ve not disturbed the scores in 3 districts e.g. Kolkata, S 24 PGS and Howrah. In N 24 PGS they’ve managed only 5 against TMC’s 28 and 4 in Hooghly out of 18. The onesided result in favor of TMC in these 5 districts (especially Kolkata, Howrah and S 24 PGS) raises the question of foul play on many levels. Inspite of the presence so much central force, there has definitely been some foul play by the TMC leading to this seemingly humiliating defeat.

The BJP must also question their less than average leadership, their inadequate organizational level, their internal conflicts owing to the inclusion of some controversial figures from the TMC, their utter dependence on Modi-Shah(external/central leaders) and bad relationship with the supporters and karyakartas & their families post 2019 Lok Sabha.
People in several regions have lost faith on the Bengal BJP because of their leaders’ arrogance and callous attitude towards their supporters and karyakartas. I, on a personal level can attest to this. I used to attend BJP on ground till I found out that they don’t care about their injured karyakartas and rally attenders. The top level leaders are selfish-cowards who would hand themselves over to the police right before the lathicharge and leave their karyakartas and supporters on their own to take a beating. This selfish and cowardly attitude has been shown by them during the post-poll violence as well. This is an issue they must fix immediately if BJP is to get back on track before 2026.

According to some polls, the Muslim voter turnout this Bidhan Sabha has been 94% while the Hindu voter turnout has been only 65%. Those remaining 35% Hindu voters may have consisted of a substantial number of BJP supporters, who did not go out to vote because of the rise in Covid cases in April.

Disappointed and angry karyakartas have sabotaged BJP votes in some places and themselves have either voted NOTA or TMC just to teach the party a lesson. Their behavior is not unjustified as the party has done them much injustice by including TMC gundas who have previously bloodied the karyakartas and harassed and bullied them. The BJP must remember, the house is made of bricks and not the other way around. The party will only stand if the karyakartas are standing. Karyakartas make the party and not just leaders. No base, no superstructure.

BJP had done this in Delhi before, where they had bought a bunch of AAP MLAs before election but the seat change was negligible. People don’t vote for leaders alone especially when it comes to Mamata Banerjee’s party in Bengal. A whole load of Bengal people vote simply because of Mamata Banerjee, no matter which individual they’re voting for in a single constituency. Hence buying or hiring TMC leaders has not been helpful in most cases.

Prashanta Kishore has been a key factor in this election. He has played several mind games as well as strategy games to get TMC through by a large margin. One of these strategies is his amazing queen sacrifice in Purba Medinipur’s Nandigram, where he made Mamata Banerjee face off against the “gaddar” Suvendu Adhikari. The Adhikari family put their entire focus on Nandigram and were less than present in the other constituencies. This resulted in Adhikari defeating Banerjee by a narrow margin of around 2000 votes, while losing Purba Medinipur 7-9.

The Sitalkuchi incident may have influenced the votes in the 5th-8th phase. After the central force(CISF) shot down 4 local goons who had arrived to harass and bully the voters with ‘lathis’ or knobsticks. Some people raised this as an humanitarian issues. Even though the BJP won in Sitalkuchi, there is a chance it may have turned people against the BJP after April 10th, especially since their unintelligent leaders decided to run their mouths about it.

While the Bengal BJP only highlighted of the promises made by Modi to be fulfilled in the future, Banerjee actually did it in the present. She came up with several prakalpas (since 2015-16) like Kanyashree, Yuvashree etc. She also launched several other schemes like Swastha Sathi, Khadya Sathi etc. and has slyly managed to take credit for several central government schemes.
The “5 takay dimbhaat” prakalpa which included rice, vegetables, dal and egg curry for just Rs.5/- was a big hit among the subaltern population.
The Kanyashree prakalpa might have successfully broken up the female Hindu votes in her favor, just like the ban on triple talak is said to have gained BJP the Muslim woman’s vote.

Issues have always rocked Bengal. In the 70s it was the Communist-Socialist issue and the refugee issue that handed CPIM the ignition keys to Bengal in 1977. While it was the Singur-Nandigram issue of 2007 that made Mamata Banerjee the CM in 2011. There have been several issues in Bengal during the reign of Banerjee but the unworthy leaders of Bengal BJP have failed to make use of any. One of the most noteworthy issue the Bengal BJP failed to grab is the school shootout incident of Darivit (North Dinajpur) which claimed the lives of 2 young boys Rajesh and Tapas, who were shot dead by Banerjee’s police. But Mamata Banerjee is no fool. She used the covid-19 pandemic issue as a way to gain political mileage as she promoted herself as a caring leader during the awareness campaigns early on.

The people are quite upset about the hike in petrol and gas prices in the recent years and the so-called bhakts are not helping with their silly explanations like tomatoes are cheap, put tomato puree in your oil tank. Excessive trolling of the general public and branding them as deshdrohi etc., upon questioning the central government’s policies have angered a lot of people.
The vaccine drama hasn’t done any good to the BJP either. Different prices for the same vaccine has raised many eyebrows and may have affected the ballots in general, the likes of which we’re seeing in the UP Panchayat elections as well, where the BJP hasn’t done well in Varanasi and Ayodhya either.

Starting with the Garg Chatterjee led provincial B team of TMC, the Bangla Pokkho who have been pitching strongly for Bengali regionalism, the TMC pitched in solidly for “Bengal’s Own Daughter” which struck a chord among the Bengalis as BJP had brought in several candidates from other states. The TMC has also been giving a pound for pound fight and matching BJP’s aggressive politics with counter aggression. The BJP lost this battle in the end as TMC’s aggression is mostly dependent on goons and radical Muslims from bordering areas while the BJP relies on the CBI and manipulates the law and order system to throw accused opposition party members in jail before conviction.

This is at last though it is probably one of the most important reasons. But since this is the most unluckiest, it is at #13. Though bribery is nothing new in Indian elections, Modi-Shah was certain the CISF would be able to stop this. Bad judgment on their behalf. The polling agents of the BJP were on average offered 5 lakhs. In more sensitive areas the amount went up. Maybe even the CISF took money?
Let’s get one thing clear, hey’re all humans and Vande Mataram is not playing in their heads all the time. Everybody likes the money more or less. The BJP will have to fight fire with fire next time, or fight 5 lakhs with 6 lakhs or 8 lakhs.

Disclaimer: The views expressed in this article are the writer’s own. Sriti O Chetona is not affiliated to any political party or ideology.