Voice of the persecuted indigenous people of CHT heard at UN 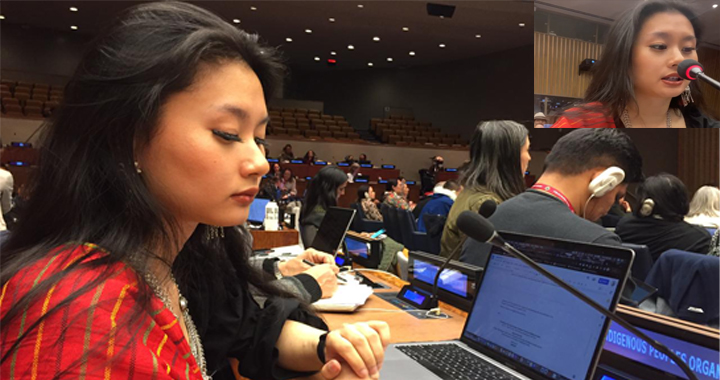 Voice of the persecuted indigenous people of CHT heard at UN

The 21st session of the United Nations Permanent Forum of Indigenous Issues (UNPFII) is convening now from 25 April to 6 May 2022 through in-person and online participation at the UN Headquarters in New York. The session continued with the theme of the Forum’s twenty-first session – ‘Indigenous peoples, business, autonomy and the human rights principles of due diligence including free, prior and informed consent – and the start of the International Decade of Indigenous Languages 2022-2032.

From Bangladesh, Priti Bindu Chakma participated in the online permanent forum meeting on behalf of PCJSS and Chanchana Chakma on behalf of the indigenous women’s network in Bangladesh.

On behalf of PCJSS, Ms Augustina Chakma has stated that it is urgent to transfer political, administrative and economic powers and functions to the CHT Regional Council and three Hill District Councils for ensuring the rights of self-determination of the indigenous Jumma peoples.

Ms Chakma’s statement started by saying that “Without the rights to self-determination, sustainable development of indigenous peoples cannot be obtained. The indigenous Jumma peoples of the Chittagong Hill Tracts (CHT) are no exception in this regard. https://youtu.be/70PwdMfiBx0

Ms Chakma raised the demand in participating in the Agenda Item 4: “Discussion on the six mandated areas of the Permanent Forum (economic and social development, culture, environment, education, health and human rights), regarding the United Nations Declaration on the Rights of Indigenous Peoples, the outcome document of the World Conference on Indigenous Peoples and the 2030 Agenda for Sustainable Development” of the Permanent Forum’s session.

In 1997, the historic CHT Accord was signed between the Government of Bangladesh and the PCJSS in1997, to introduce a special governance system consisting of three Hill District Councils at the district level and the CHT Regional Council as the apex administrative body at the regional level.

But due to the government’s delay-dallying tactics in the proper and full implementation of the Accord, such a system of self-governance has not yet developed in CHT. In the last 25 years, these councils have not been entrusted with the subjects of general administration, law and order, police, land and land management, forest and environment, tourism, development of communication systems etc.

The lack of a participatory role of CHT people in the administrative system has terrible negative effects on the national unity of indigenous Jumma people and the existence of their birth land , their culture and their livelihood, human rights and the environment of the biological diversity of this region.

The current government of Bangladesh pursues military media policies similar to former dictators. At the moment, the CHT region has been completely delivered to the Army under the jurisdiction of the military rule “Operation Uttoron”. The army have created different obstacles. Therefore, the situation of human rights in CHT has become extremely critical. The indigenous Jumma people are now forced to live in a suffocating state.