Stop harassment on Hindu students in Bangladesh in the name of Blasphemy. 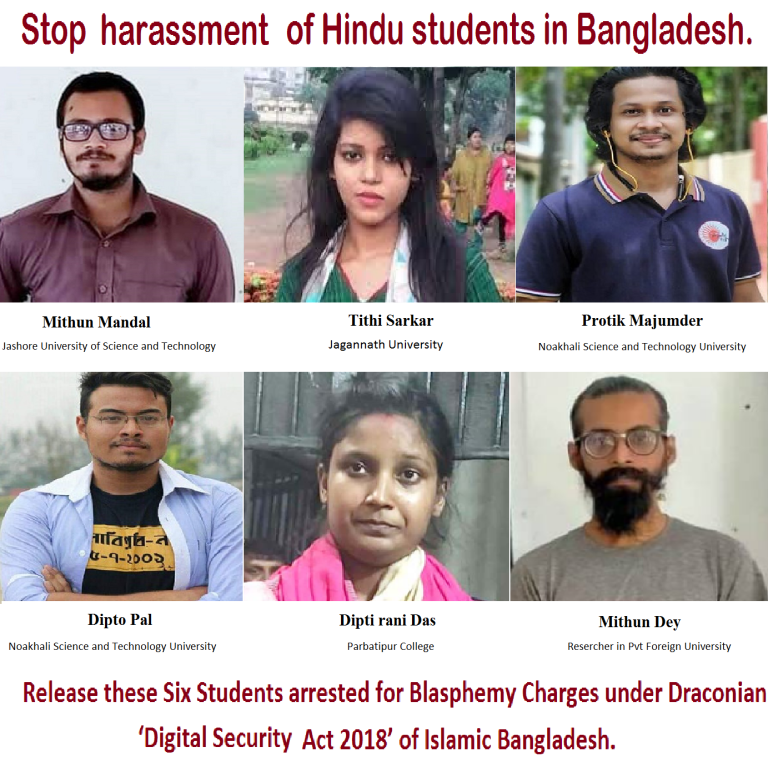 Stop harassment on Hindu students in Bangladesh in the name of Blasphemy.

In Islamic Bangladesh the Hindu students are now targeted in a new module of blasphemy to doom their career for ever. In Islamic Bangladesh, the fundamental Muslims are trying hard to bring Blasphemy Act  as crime of highest count with capital punishment.  But, now, the Bangladesh Police is rampantly arresting  Hindu students under various sections under Digital Security Act 2018 and as its amended version  in 2020 even there are no sections directly upon blasphemy. Even then, minority Hindu students in Bangladesh are continuously being persecuted for alleged Blasphemy against Islam.

These events follow a common pattern. Hackers target Facebook IDs having Hindu names, hack the IDs, and then using the hacked ID comments blasphemous post against Islam in social media. Then the screenshot of the comments is posted in a social media platform to instigate the Muslim students as well as general population especially those with radical Islamic bent of mind. Then the university authority suspends the student and a case is filed against the student in Digital Security Act (DSA). As a part of Cyber Jihad, Islamists now find the clue of blasphemy as another tool of Hindu persecution.

The few recent incidents are narrated below:

The suspended JUST student Mithun Mandal, is in his first year at the Department of Finance and Banking. He was held from his home in Debhata upazila of Satkhira.

Satkhira DB police Inspector Yasin Alam Chowdhury said they are investigating the matter. “Mithun will be shown arrested if the allegations against him are proved. We took him into custody in order to save him from agitated locals.”

The meeting was presided over by Vice Chancellor Prof Md Anwar Hossain.

Mithun has been served a show cause notice asking why he should not be expelled from the university permanently, Rashid said.

The authorities also decided to lodge a case against him under conventional laws, including the Digital Security Act, he said.

Besides, a four-member probe body has been formed to look into the matter and asked to submit its report within seven working days.

The university administration will take final action against him after receiving the report, the official added. (Source: https://rb.gy/wxnlq0 )

The authorities of Jagannath University (JnU) on Monday suspended a student for allegedly posting derogatory remarks about Prophet Muhammad (Pbuh).

The suspended student was identified as Tithi Sarker, a third-year student of the Zoology Department.

A suspension order signed by Registrar Md Ohiduzzaman has been issued.

A show-cause notice was also served seeking an explanation of why her studentship should not be permanently cancelled.

On Saturday, students of the university staged a protest rally under the banner of “general students” demanding permanent expulsion of Tithi Sarkar within 72 hours.

The JnU suspension came at a time when in France a history teacher was beheaded for showing cartoons of the Prophet Mohamed in a free speech lesson in a gruesome attack that has shocked the country and prompted a government crackdown on radical Islam.

[ As of 28.10.2020, Tithi Sarker is feared to have subjected to forced disappearance by the radical Islamist elements. Her family has no clue regarding her whereabouts, and she is unreachable through her cell phone.]   (Source: https://rb.gy/b7jfmr )

Both of them were served show-cause notices to explain within November 2 as to why they should not be expelled and sued under the Digital Security Act (DSA).

A letter of Suspension and Show cause as served to Protik Majumder and Dipto Pal.

A notice, signed by the assistant director Iftekhar Hossain of NSTU Information and Public Relations office, was issued in this regard on Wednesday.

According to the notice, the disciplinary board of the university decided to suspend the two students as they had posted derogatory remarks about Islam and Prophet Muhammad (pbuh) on Facebook which is a punishable offence under the country’s law.

Their seats at the residential halls of NSTU have also been cancelled, the notice added.

Reports of such suspensions come at a time when anti-France protests are raging in different parts of the world, including Bangladesh, over President Emmanuel Macron defending cartoons depicting the Prophet Mohammed (pbuh). (Source: https://rb.gy/6is2jr )

Dipti Rani Das (17),  a student of a local college was arrested by Parbatipur Railway Police on Wednesday (Oct 28, 2020) night when she was trying to flee in disguise as reported by Parbatipur Model Police Station In-Charge.

It is alleged that Dipti, a daughter of a hardware businessman,   Dilip Kumar das of Mujaffar Nagar  of Parbatipur Sub-District Town, uploaded various ‘Objectionable posts against Quran’ which led a big protest in the town among  the devout Muslims. Protesters wanted an immediate arrest of Dipti for a severe punishment. Dipti questioned the ‘mode of attack upon the non-Muslims as directed in Quran’.

Seeing the huge protest rally in the town, Dipti decided to flee Dhaka to take refuge in a safe place. But, with a tip off , police arrested from a railway compartment of Dhaka bound 766 Intercity Neelsagar Express standing at Parbatipur Railway Junction.

Police arrested Mithun from his residence at Nazir Road  in Feni Town on Thursday (Oct 29, 2020) night. Police told that the accused posted various ‘objectionable materials against Islam from his Face Book ID ‘Piklu Neel’ which created repercussion among the Muslims of Feni town.

Upon the complaints by one Chhanaullah, police arrested Mithun and produced him at the Court of Senior Judicial magistrate Dhrubajyoti Pal on Friday (Oct 30, 2020) and prayed for 10 days remand in Police custody.

It has been reported that Mithun is a private researcher in a foreign university. (Source: https://samakal.com/whole-country/article/201041890)

Arrest and persecution on minority Hindus in the name of blasphemy charge is nothing new in Islamic Bangladesh. But, it is remarkable that in the festive session of Durga Puja (the biggest festivity for Bengali Hindus), six Hindu students including two girl students have been arrested on the charge of blasphemy in a single month of October, 2020.

Bangladeshi Hindus are living in constant fear. Previously Hindu homes and temples were attacked in 2012, 2013, 2014, 2016, 2017, 2019, and 2020 based on false rumor of blasphemy against Islam. On the other hand, Hindu faiths are constantly being mocked by the radical Muslims over the social media. The prominent, affluent, and celebrity Hindus are also victims of this.

In 2015, Bangladesh national cricketer Litton Kumer Das faced religious hatred after posting a photo of goddess Durga on the occasion of Puja on a social networking site and he was forced to remove the post (Source: https://rb.gy/hsblq9 ).

In recent, Bangladeshi public health activist Dr. Zafrullah Chowdhury made a hate speech against Hindus and India/Bharat during a public address. Referring to the Ram Mandir construction at Ayodhya, Dr. Chowdhury declared that both the Ramayana and the Mahabharata are ‘tales of fiction that narrate many incidents of falsehood and depravity’; and based on such ‘lies’, the Ram Mandir is now being built in Bharat after demolishing a ‘mosque’.  But, no case has been registered against Zafrullah Chowdhury  so far. But, if any Hindu had made similar thing remarks against Islam, he/she would have been persecuted in Bangladesh (Source: https://rb.gy/6shaez ).

In the Jihadi exercise of Hindu-less Bangladesh, Hindus are always accused, tortured, bullied, evicted, murdered and in all the ways which Quran directs to do so towards the Kaffir.

The emerging Act against Blasphemy will do the heaviest harm to the minority people in Bangladesh.Hindu Existence Forum demands immediate release (and withdrawal of the suspension) of these six students viz. Mithun Mandal. Tithi Sarkar,  Protik Majumder, Dipto Pal, Dipti Rani Das and Mithun Dey in either from Police or from Judaical Custody in Bangladesh to proceed in their studies in  humane treatment.