SHYAMA PRASAD MOOKERJEE: THE SAVIOR OF THE BENGALI HINDU 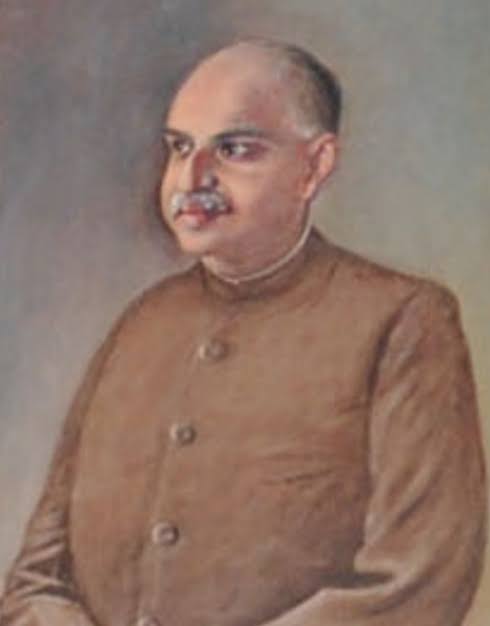 SHYAMA PRASAD MOOKERJEE: THE SAVIOR OF THE BENGALI HINDU

One of the founding fathers of independent sovereign India, Dr. Shyama Prasad Mookerjee
was a great patriot, educationist, parliamentarian, statesman, humanitarian and above all, a
campaigner for national unity and integrity. Born on 6 July, 1901 in Calcutta, Shyama Prasad
inherited a rich tradition of erudite scholarship, fervent nationalism and fearlessness from
his father, Sir Ashutosh Mookerjee, who as the Vice-Chancellor of the Calcutta University
and a Judge of the Calcutta High Court occupied a unique position in the life of Bengal. His
mother, Smt. Jogamaya Devi, was a devout Hindu lady, devoted entirely to her husband,
family and Dharma. Being an
upper-class Brahmin family with a high social status, the Mookerjee house in Bhowanipur,
Calcutta, was known as much for its “Poojas” as for its being an abode of Saraswati.
Had it not been for Mookerjee, there would have been no West Bengal today. He was the one
who stood like a rock against the Muslim League’s demand to include the whole of Bengal
(East and West) in Pakistan and also against a sinister plot hatched by the then prime minister
of Bengal, Hussain Shaheed Suhrawardy, for a United Bengal. Had Mookerjee not opposed
the plan to include the whole of Bengal in Pakistan or defeated the game plan of Suhrawardy,
also known as the ‘butcher of Bengal’ for his direct involvement in Direct Action Day,
Bengali Hindus would have met the same fate as that of Kashmiri Pandits today and would
have become perhaps the largest refugee population in the world.
It was Shyama Prasad Mookerjee who launched the Bengali Hindu Homeland Movement to
create a homeland for Bengali Hindus within the Indian Union. This was in response to the
Muslim League’s demand for inclusion of the whole of Bengal in the proposed separate
country of Pakistan. The League’s premise was that since composite Bengal was a Muslim
majority province and Bengali Muslims outnumbered Bengali Hindus – it should therefore
become part of Pakistan. Mookerjee and other farsighted Bengali Hindus built up a strong
movement opposing this idea and got the Indian National Congress to also oppose the move,
as a result of which the League’s plan was defeated.
When Suhrawardy realised that partition of Bengal was inevitable, he quickly floated a
proposal for a United Bengal that would be a sovereign and independent entity equidistant
from both Pakistan and India. The wily Suhrawardy, his hands still dripping with the blood of
thousands of Hindus massacred in the ‘Great Calcutta Killings’, also roped in some
unsuspecting and gullible (Bengali Hindu) Congress leaders – primary among them Sarat
Chandra Bose (the elder brother of Netaji Subhas Chandra Bose) – to back this sinister plot
he hatched in April 1947.

Suhrawardy’s justification for the United Bengal proposal was that partition of Bengal would
bring economic ruin to both parts of Bengal. The two parts of Bengal were dependent on each
other; while the east was the food bowl and rich in agriculture, the west had all the industries
and the Calcutta port, and was the economic hub. For instance, while all the jute mills were
located in the western half of Bengal, the raw material was mainly produced in the eastern
part. Similarly, the paper mills in the western part of Bengal were fed by bamboo grown
mostly in the eastern part, while tanneries in west Bengal also sourced their raw hide mostly
from the east. Bose and some other Congress leaders like Kiran Shankar Roy saw economic
justification in Suhrawardy’s plan and backed it unwittingly.
Muhammad Ali Jinnah also backed the United Bengal proposal after Suhrawardy met him
and explained the purpose behind it. Jinnah is reported to have told his aides that a United
Bengal as an independent country would be a Muslim-majority country and, hence, would
always be ruled by Muslims. Such a country would be a natural ally of Islamic Pakistan
rather than of the Hindu-majority India. And, eventually, such a country could also merge
with Pakistan. In fact, say many historians, that were Suhrawardy’s ultimate objective: befool
some Bengali Hindu leaders to back his plan for an independent Bengal and, after its
formation, bulldoze and terrorise the minority Hindus into accepting a merger with Pakistan.
Sarat Chandra Bose and some other Bengali Hindu and Muslim leaders, including Abul
Hashim, met and managed to convince Mahatma Gandhi about the plan. Gandhi endorsed the
claim for a united and independent Bengal on 12 May 1947. Mookerjee, who by that time had
managed to convince many other Bengali Hindu leaders of the dangerous implications of the
United Bengal ploy, held immediate and extensive parleys with Jawaharlal Nehru, Sardar
Patel, and the then Congress president J B Kripalani. J B Kripalani issued a statement the
rejecting the United Bengal proposal. Nehru and Patel also rejected the plan. Jinnah, realising
that the United Bengal ploy had fallen through, also rejected it and went back to his demand
for the creation of Pakistan that would include Muslim-majority areas of Bengal.
Mookerjee led the Bengali Hindu Homeland Movement that gained mass momentum after
the Muslim League engineered the Great Calcutta Killings and the Noakhali Riots, when it
became apparent to Bengali Hindus that they would not be safe in Muslim-majority Pakistan.
Hence, they felt, the need for a separate homeland within the Indian Union for Bengali
Hindus. Following the riots, atrocities and persecution of Bengali Hindus in Calcutta
continued.
Suhrawardy got 600 Punjabi Muslims recruited into the Calcutta Police and the force then
started indiscriminate arrests of Hindu men and boys, molestation of Hindu women and girls,
and looting of Hindu households. Such persecution of Hindus took place throughout East and
West Bengal. The Suhrawardy government imposed pre-censorship on news comments
criticising the police excesses and, through a special ordinance, the government imposed

severe penalties on Hindu-owned newspapers like Amrita Bazar Patrika, Hindustan Standard,
Ananda Bazar Patrika, and Modern Review, even confiscating their security deposits.
The persistent and terrible persecution of Hindus at the behest of the Muslim League
government convinced the Bengali Hindus that co-existence with Muslims was impossible.
Eminent Bengali Hindus like and historians were roped in by Mookerjee to lead the demand
for partition of Bengal. The Hindu Mahasabha, led by Mookherjee, organised meetings all
over Bengal and built up the movement for partition. He also got the Indian National
Congress to join in. Mookerjee was very clear, and said so publicly, that even if Punjab
province was not partitioned, Bengal needed to be partitioned to ensure the safety of Bengali
Hindus.
Mookerjee not only mobilised public opinion in favour of the partition of Bengal, he also got
eminent persons from all walks of life to support the demand. The top 50 jurists of the
Calcutta High Court, the chambers of commerce, top industrialists like Ghanshyam Das
Birla, and many others backed the partition demand. Most crucially, Mookerjee met Viceroy
Lord Louis Mountbatten and convinced him to formulate what came to be known as the
Mountbatten Plan. Under this plan, Sikhs, Hindus, and Muslims in Punjab and Bengal
legislative assemblies would meet and vote for partition. If a simple majority of either group
wanted partition, then these provinces would be divided. To make it clearer, under the
Mountbatten Plan, a single majority vote in favour of partition by either notionally divided
half of the assembly would decide the division of the province.
During June 1947, members of the Bengal legislative assembly cast three separate votes on
the proposal to partition Bengal. First, a joint session of the House voted against joining the
Indian Union. After this, members of the Muslim-majority areas of east and West Bengal
held a separate session where they voted overwhelmingly against partition of Bengal and,
instead, inclusion of the whole of Bengal in Pakistan. This session was followed by another
by members of the non-Muslim majority areas of Bengal who voted for partition of Bengal. It
is thus clear that had the majority opinion in the assembly been allowed to prevail, Bengal
would not have been partitioned and the whole of Bengal would have become part of
Pakistan since the majority of the members of the assembly belonged to the Muslim League,
which was demanding Pakistan. It is to Mookerjee’s credit that this formula to honour the
opinion of the minority Hindu and Sikh population in Bengal and Punjab provinces was
devised by Mountbatten.
Had the western part of Bengal been included in Pakistan, or had Suhrawardy’s plan of
forming a United Bengal been successful, the plight of Bengali Hindus would have been
pathetic. Since 1947, Bengali Hindus in East Pakistan have faced terrible persecution. The
community has faced dispossession of properties, social and economic discrimination,
forcible conversions to Islam, rape, molestation and abduction of womenfolk, physical
torture, and murders in Muslim-majority East Pakistan and Bangladesh since 1947. The

major pogroms against Bengali Hindus were the 1950 riots, the 1962 Rajshahi massacres, the
1964 massacres, and the 1971 genocide; even after the formation of Bangladesh, Hindus have
faced persecutions that continue till today. Hindus formed more than 28 per cent of the
population of erstwhile East Bengal in 1947, but due to continuous persecution and atrocities
on them, they form just over 8 per cent of Bangladesh’s population today. The exodus of
Bengali Hindus fleeing persecution and torture from Bangladesh into India continues to this
day.
Thus, the plight of Bengali Hindus in a Muslim-majority United Bengal would have been the
same as that of Bengali Hindus in Bangladesh today. Bengali Hindus would have suffered the
same fate as Kashmiri Pandits and would have had no place to call their own. They would
have become the largest population of refugees in the world. That Bengali Hindus have West
Bengal today to live safely in is all because of Shyama Prasad Mookerjee.
History textbooks have to be revised to project the correct history of Bengal, highlighting the
contribution of Mookerjee. The fallout of Bengali Hindus remaining ignorant of the
contribution of Mookerjee and how he saved Bengali Hindus from imminent annihilation, at
worst, or externment, at best, is all too evident today.

Kingsuk Talukdar is an MBA from National Institute of Technology, Silchar and he works in IndiaMART, Client Servicing Division. He is from Guwahati, Assam.