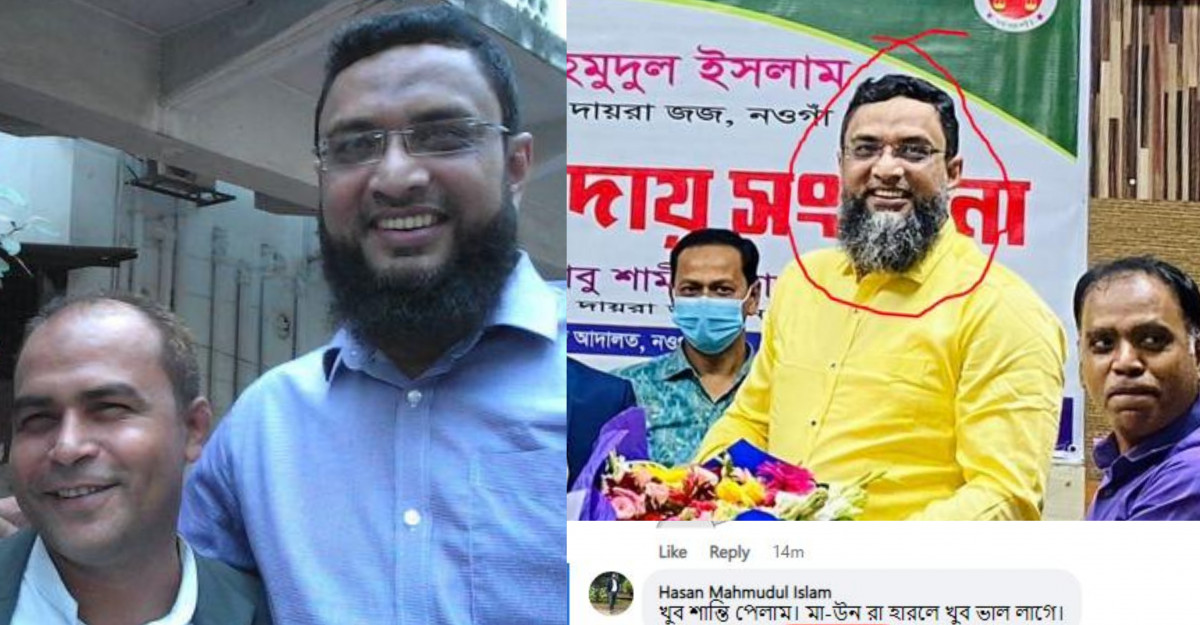 This time, the controversy didn’t rise for Ehteshamul’s Facebook post. In the comments of that post, a Bangladeshi Judge commented, “I got a lot of peace.” It feels good when the “Malaun” loses. Anweshan News has verified the information and found evidence that the commenter’s ID belongs to this Judge. It should be mentioned that the “Malaun” word is used by Islamists to mark and abuse the Hindu community. The word is derived from the Arabic “ملعون”, meaning “accursed” or “deprived of God’s Mercy”, and in modern times, it is used as an ethnic slur by the Islamists in West Bengal and Bangladesh region for Hindus.

The accused Judge passed the 24th BCS and was serving as Chief Magistrate in Kurigram Chief Judicial Magistrate Court. Currently, he is posted in Naogaon district as an Additional District and Sessions Judge in District Sessions Judge Court.

After the accused judge’s comment went viral, a storm of anger and condemnation has arisen among people of a non-communal and progressive spirit over how anti-Hindu Judge Hasan Mahmudul Islam insulted Hindus by mentioning them as “Malaun.” Judge Hasan Mahmudul Islam’s insult towards Hindus shows the grim reality of Hindus in Bangladesh, where top officials are hard-core communal in their minds. Many people are alleging that communal and pro-Islamist miscreants have been placed at the highest echelons of independent Bangladesh today due to the neglect of background checks and investigations in the appointment of BCS and judges. People have expressed that if exemplary punishment against such evil forces is not taken, then Hindu life in Bangladesh would become more miserable.

Even before this, it is also alleged that even though such Islamist and fundamentalist behaviour by Bangladeshi government officials has been revealed at different times, exemplary punishment has not been taken. Unless it goes viral, no action is usually taken. People with such a mindset are a clear threat to a secular country, and it is necessary to identify them and take action against them, experts said.