Prashant Kishore, the 50 Year Old Seat-sharing Pattern in Bengal Assembly and why the BJP Didn’t Really do too Bad 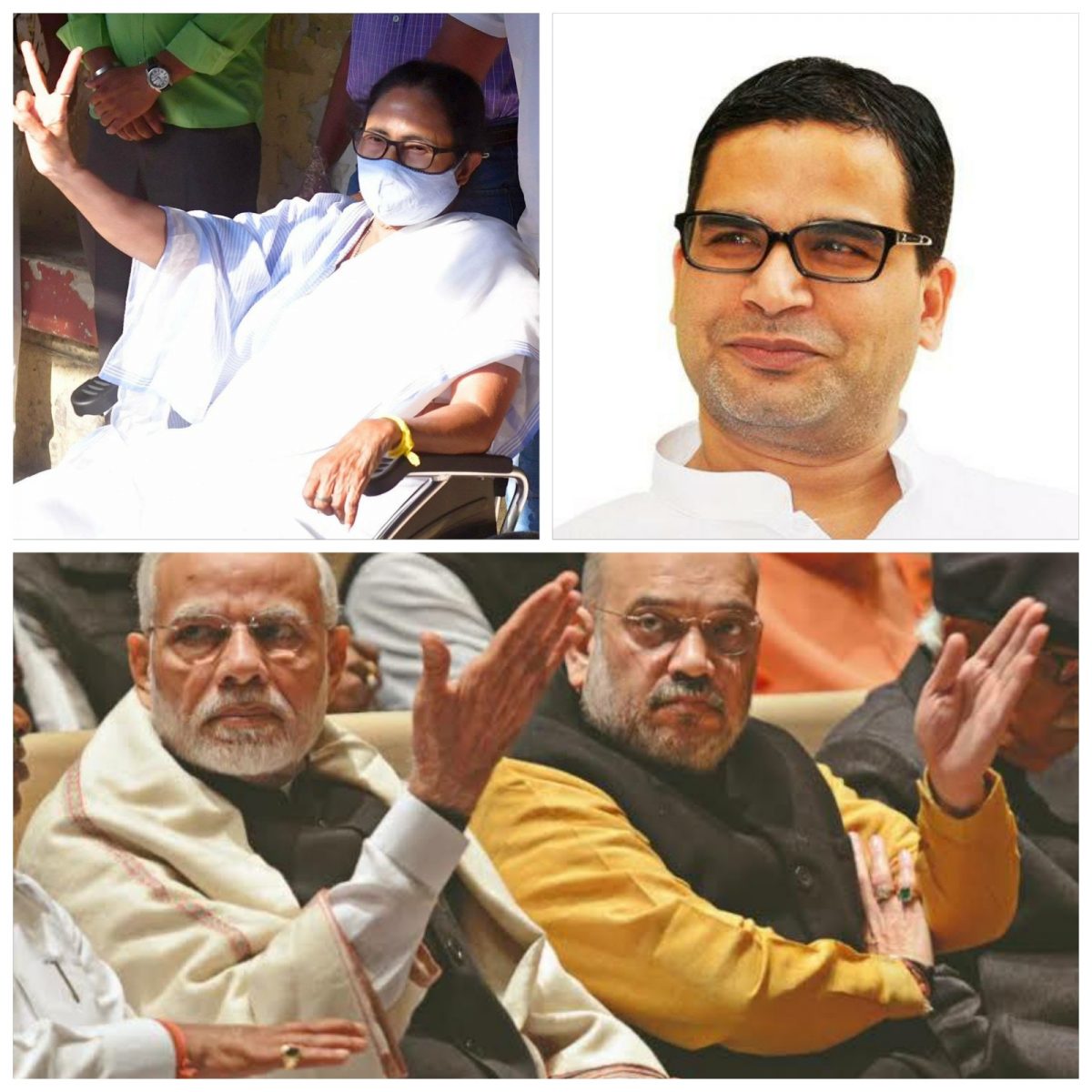 Prashant Kishore, the 50 Year Old Seat-sharing Pattern in Bengal Assembly and why the BJP Didn’t Really do too Bad

Exposing Prashant Kishore for the genius he isN’T…

How did Prashant Kishore predict with such solemnity that if BJP reaches 3 figures, he will quit?
How was he so confident that he put his career on line? Well let’s ravage the suspense right away, so we can focus on important things – he was gonna quit anyways! As we all know, PK has announced his retirement, he did it right after the results were declared and he was proven right. So basically he knew this was his last assignment anyways and he had already got the money. So why not create a huge drama and make himself appear like a braveheart prophet who knows his job so well that he is willing to bet his livelihood!

Now, let’s talk about the research he put in to make this assertion. If you analyse the Vidhan Sabha results of WB of the past you’ll see a clear pattern, the losing party in each election has failed to reach 3 digits. Even Mamata Banerjee, the so-called Bengal’s own daughter, did never cross 80 by herself before she actually gained power with 200+ seats in 2011. In the WB Bidhan Sabha elections, it is tradition that the winning party or coalition wins with 200+ seats or somewhere very close to 200 while the second best scoring party or the chief opposition party or coalition does not cross the 100 mark.

Let’s go back about 50 years. The 1972 WB Legislative Assembly election or the WB Vidhan Sabha elections were held in March 1972, less than a year after 1971 WB Assembly election which was held alongside the Indian General election. Though the 1971 Vidhan Sabha saw a close contest between the left alliance and congress, the 1972 Vidhan Sabha saw an absolute one-sided affair as Sidhartha Shankar Ray’s INC(R)(Indira Gandhi’s faction) won 216 seats out of the 280 contested for and their coalition partner the CPI (yes!) won 35. This coalition was called PDA or Progressive Democratic Alliance and they won over 250 seats leaving Jyoti Basu’s CPIM with a mere 14 seats! But the results were not without controversy. There was widespread violence (just like the previous year, 1971) and murders before and during the elections. The CPIM refused to accept the results and accused the Congress(R) of introducing ‘semi-fascist terror’ in WB. The Congress(O) also made accusations of rigging and the former Bengal CM Prafulla Chandra Sen alleged that there had been rigging in at least 45 constituencies. This election (and the previous one, 1971) started a trend in Bengal, a trend of violence and rigging that has continued to this day.

In 1977 however, Jyoti Basu completely turned the tables on Congress(R) and the CPI as the left front alliance (that included the CPIM, AIFB, RSP, RCPI, MFB, BBC and one independent LF candidate) bagged a total of 231 seats with CPIM alone capturing 178 seats. With the comeback of P.C.Sen and his Janata Party, this election became a triangular contest. Sen’s JP occupied 29 seats which absolutely crushed Siddhartha Shankar Ray’s Congress(R) [20 seats] and soon the one man show in Bengal began, with the CPIM slowly eating up all its opposition with their aggressive and borderline terrorist political methods. It’s worth mentioning that the Muslim League was still active in Bengal and they managed to win 1 seat after fielding 32 candidates.

The 1982 Bengal elections saw the dissolution of the Janata Party and emergence of the BJP. The left-front repeated their dominating performance and managed to occupy 238 seats, 7 seats up from the last time while Siddhartha Shankar Ray’s Congress(O) occupied all of the Janata Party’s seats and became the prime opposition to Basu’s left-front with 49 seats. The Muslim League fielded 4 candidates but failed to win any seats.

1987, the one man show in Bengal reached its peak with red terror party leader Jyoti Basu’s left-front forcibly occupying 251 seats out of 294 and the only sizable opposition, Ray’s INC grabbed 40. The Muslim League fielded 36 candidates and won 1.

1991, with democracy dead, Basu’s refined and gentlemanly dictatorship continued as the left-front won 245 seats and Ray’s INC managed 43 and the Congress coalition managed 47. The Muslim League fielded 28 candidates but failed to trouble the score.

Five years later(1996), Bengal’s political scenario saw a glimmer of hope with the emergence of “Agnikanya”(as ABP would put it) Mamata Banerjee, who led the INC to 82 seats, 39 up from the previous elections. But the left-front still managed to garner 203 seats. However, this came as a great shock to Basu and Mamata Banerjee became a terrible thought in the mind of the great dictator of Bengal. Maybe Basu saw a bigger dictator in the eyes of his rival Banerjee…

2001 saw Jyoti Basu passing the torch over to Buddhadeb Bhattacharya. Keep in mind, Bhattacharya was not elected as the CM when he became the CM in 2000, he was handed over the position by the aging Basu. But he did quite alright in 2001 Vidhan Sabha and the left-front alliance just missed the 200 mark and bagged 196 seats. The 2001 election also saw AITC (TMC) contesting for the first time in a coalition with Congress, from which Mamata Banerjee broke away from and formed AITC. The UPA coalition (AITC+INC+others) occupied 89 seats in total with AITC getting 60, INC 26 and GNLF 3.

Five years later, 2006, Banerjee was mostly busy in the centre and this affected the performance of her party as AITC won only 30 seats (NDA+ 31) and the left crossed the 200 mark again with 233. UPA alliance led by the INC managed 26.

2011- The “Parivartan”
Change. Change in what? Ruling Party? Yes, just that. Nothing else really changed about the rotten political culture of Bengal. Mamata Banerjee and the TMC hijacked the Bhumi Uchhed Pratirodh Committee’s (BUPC) Nandigram movement (backed by Maoists) and managed to create a nationwide issue which transcended boundaries and at one point became an international issue. This obviously changed the outcome of the 2011 results with the AITC and INC coalition capturing 228 seats while the left-front suffered a massive defeat and the only defeat since 1972 with only 62 seats. Mamata Banerjee swore in as the new CM, the first non-CPIM CM since 1977.

2016, the first Bengal Assembly elections after the emergence of Narendra Damodardas Modi as the PM of India. This election saw some changes in the coalitions, as the left allied with the INC (Mahajot) and managed only 76 seats out of which 44 belonged to INC. The AITC stood alone and grabbed 211 seats. The BJP, led by Dilip Ghosh opened its account in Bengal for the first time with 3 seats.

Now as you all are clear with the pattern of the Bengal assembly elections, you can figure how PK was so confident about the outcome. Now the question is, how was he sure that it wouldn’t be the other way around? The answer is either he was or wasn’t. If he was, it was probably because of his on-ground intelligence that let him know of the organizational status of the Bengal BJP and how happy are people really with ‘Didi’. If he didn’t, he was probably taking chance as he knew he would retire anyways.
However, one must wonder at the polarizing two-party result in the 2021 WB Assembly election, where the AITC got 213 and the BJP got 77 and none of them were in any coalition. (This totals to 290 out of 292, the 2 remaining were won by ISF and GJM.) The INC and the Left did not get a single seat! This election was one for the ages and it was not solely because of Prashant Kishore.

Let’s get one thing straight, this is not at all a very bad result for the BJP. In fact, the BJP is taking away some necessary Rajya Sabha seats from this election, which are likely to up their tally in the upper house by next year.
We must remember that the BJP fought by themselves, without an alliance or coalition. We must keep in mind that the Bengali people did not give a single seat to CPIM and Congress. All of Bengal got divided in two and those two parties managed 290 of the total 292(out of 294 available) contested for. Looking at the election pattern in Bengal for the past 50 years, we can clearly see that the winning party or the winning coalition has won by gaining 200+ seats (2001 being a small exception, where LF won 196 seats) and the losing coalitions or parties have not managed to reach a 100 seats. So considering all that, BJP has done quite alright. They have not been able to break 50 year old pattern, which they expected to do, but have not done any worse than others. Especially considering that they got 77 seats by themselves.

Modiji need not be disappointed, the Bengali Hindus have voted for him by the millions(over 2 crores), otherwise he wouldn’t have reached this number. BJP must remember that the second majority of Bengal did not vote for them. Mamata Banerjee received more than 85% of the Muslim votes of Bengal. Hence close to 30% of the total casted votes went to Mamata Banerjee anyways. That is well over a 100 seats considering voter turnout. The total percentage of votes the TMC received is 48% of the total casted votes and BJP has received 38% of it. In many seats the BJP has lost by less than 1000 votes. So simply judging by the numbers ‘213 & 77′ is a gross injustice. The BJP has been successful in getting the Hindus’ votes. However, they have much work to do in Bengal and if they’re practical about achieving power in Bengal, they must accept that this cannot be done merely by polarization. They must match Mamata’s ‘prakalpas’ pound for pound. Also they’ll most likely not achieve 200+ by themselves in 2026. In fact, they may not even get majority(148 seats) by themselves. They may get very close. Hence they need to make some alliances and do everything in their power to break the Muslim votes.

by Deep Biswas (Writer and Researcher, Terrorism and Religious Persecution)

Disclaimer: The views expressed in this article are the writer’s own. Sriti O Chetona is not affiliated to any particular political party or ideology.